What can’t he do? Chris Colfer sings, dances, acts and writes. His debut novel The Land of Stories was released yesterday. What’s it all about? 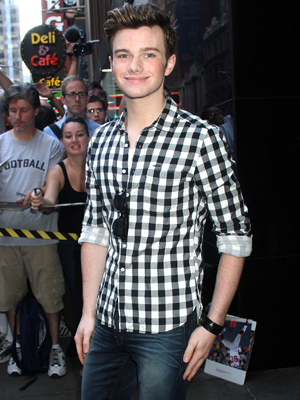 The teenage and adult world already loves Chris Colfer for his portrayal of Kurt Hummel on Glee; now the wee ones will love him too…

The 22-year-old actor has penned a children’s novel, The Land of Stories, and it hit the bookstores yesterday.

The book follows twins Alex and Connor as they fall into a world of fairy tales full of creatures they’ve only read about in stories. The novel is inspired by Colfer’s own childhood, when he used books as a method of escapism and, at times, inquisition.

“I used to ask, ‘Mommy, who’s the man in the mirror? Why’s he talking to the evil queen? Why’s she so evil? Why does she hate Snow White so much?'” the actor told Associated Press. “I just tried to clarify the questions that I had as a kid.”

Colfer wrote the book during the Glee tour last summer and is planning to release an audiobook using his own voice. The young star is also hoping to see the novel turned into a film, with one particular actress occupying most of the screen time.

Sounds like our kind of movie. So if you have little ones at home or are longing for an adventure, this may be what you’re looking for. Check it out, and let us know what you thought.