Canada has some great athletes representing us at London 2012. Among them are Simon Whitfield and Paula Findlay — two incredible triathletes looking for gold at the Summer Games. Read on to find out why you will definitely want to tune in this August. 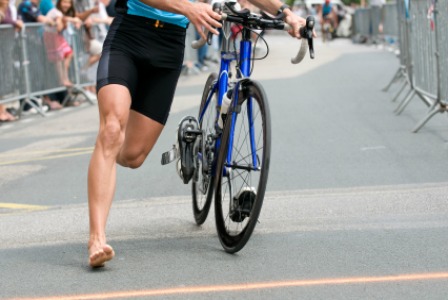 The triathlon is a tough sport, as it requires athletes to take part in not one, but three equally challenging activities. Triathletes begin with a 1.5-kilometre swim, continue straight into a 40-kilometre bike competition and then race to the finish with a 10-kilometre run. That’s no walk in the park! Fortunately we have two incredible athletes who are sure to do Canada proud at this impressive sport.

If you have never heard of Simon Whitfield, that’s OK; he’ll be a hard one to miss at these Summer Games, as he has been selected to carry Canada’s flag at the opening ceremonies. A well-earned honour considering the British Columbia native has already won a bevy of medals during his years of international racing. The most notable of these are his Olympic titles: gold in Sydney 2000 and silver in Beijing 2008. At Sydney he was darn-near giddy when he looked back near the finish line and discovered no one was catching up and the Olympic gold was his. Then in Beijing, he exploded out of fourth as the finish approached and shot past his competitors to claim a place on the podium. This will be his fourth and final appearance, marking his departure from Olympic racing, which no doubt gives him an extra boost of determination to finish his Olympic career with a win. He also happens to have an additional motivator, as the finish line at the Games also represents pursuit of family life with his wife and two young girls. Though he will continue to do Canada proud, as he will take part in other races, Whitfield is a true family man and will give winning gold at the Summer Games all he has before settling into fatherhood.

While Simon is the experienced veteran of the sport, Paula Findlay is the young, strong up-and-comer. Findlay has been racing for Canada since her first competitive year in 2006, when she took part in the World Junior Championships. Since beginning the sport at the age of 15, Findlay has earned such honours as being the first Canadian athlete to win a World Championship Series event, as well as the only woman to win back to back. Plenty of golds are in her history, and it seems likely she will be eager to add an Olympic medal to her collection. This Edmontonion may be only 23, but she is ready and willing to get her Olympic career started with a bang!