It’s been too long. Larry King left CNN in 2010, and life hasn’t been the same since. But the host is launching a new show in a completely digital format. 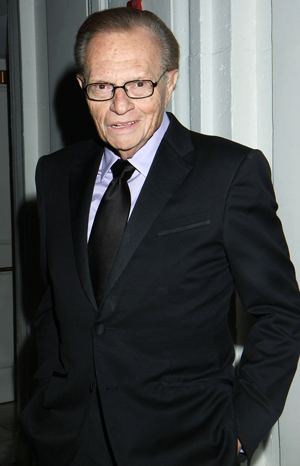 The King is back!

Back in March, we announced Larry King‘s expected comeback to the late-night talk show world, and now the time has come to see the old suspenders in action once more.

King is launching a nightly series, Larry King Now, on Hulu, but it will also run on Ora.TV. The half-hour show will be broadcast from Monday to Thursday.

This is King’s first show since wrapping up Larry King Live on CNN in 2010, which he hosted for 25 years.

“I have always been driven to innovate, from my time on radio, to the first call-in show on national television, to being an early adopter of online columns and Twitter,” says King. “I am thrilled about our partnership with Hulu. I love being able to interact directly with audiences, and digital TV allows me to do this in new and powerful ways.”

Now you can watch Larry King on demand through Hulu or through Ora.TV — how fun is that? The show is set to premiere on Monday and feature guests like Seth MacFarlane, Matthew McConaughey and Meghan McCain through the week.

Will you watch King’s new show? And how do you feel about made for on-demand shows?

10 Things the men of The Bachelorette certainly do tell!
American Idol is on its last legs
J.Lo leaves Idol: Who should replace her?