It may not be possible for the men to tell “all” in a two hour show. But there are ten things that became abundantly clear in tonight’s episode of The Bachelorette: The Men Tell All. Read on to find out what they are! 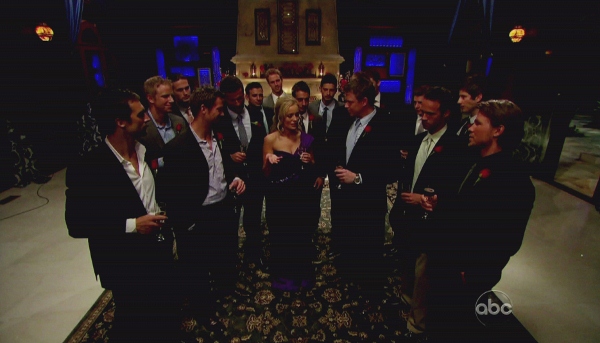 1. Emily has a potty mouth!

2. Bachelor Pad is going to be ridiculous!

Bachelor Pad premieres next Monday and after the previews shown tonight — there is no doubt it is going to be full of unnecessary tears, uncalled for drama and bizarre hookups as past contestants of the show compete for a quarter of a million dollars. It’s going to be madness!

If there’s one thing you can usually be sure of when you tune into a reality show, it’s that the host will maintain a consistent poker face and stick to a strict regimen of neutral comments. But that isn’t the case tonight! Chris finally shows us a bit of his thoughts on what goes down on the show when Bachelorette villains Kalon and Ryan take the hot seat. His newfound voice seems best summed up through his question to Ryan: “Is there a possibility that you might just be an arrogant a**?”

4. Wolfe has a wicked sense of humor

It’s understandable that when you’re trying to cram weeks worth of footage into a series of two hour episodes, certain people’s personality traits get left on the cutting room floor. But after some of the clips shown and comments made in tonight’s Men Tell All, it seems like nothing short of a travesty that Wolfe came off as slightly on the boring side in the show when he clearly has a wicked amount of wit. Take, for example, his statement on Kalon: “I don’t see him missing a facial to pick up Ricki from soccer practice.”

Chris’ need to defend his maturity level throughout the run of the show seemed ongoing — and it certainly didn’t disappear between then and The Men Tell All. He seemed eager to jump on just about any comment that came vaguely in his direction. Although he did just come off filming for Bachelor Pad which likely didn’t help matters. Guess we’ll find out when the show premieres next week!

6. Ryan is NOT going to be the next Bachelor

He may have talked about his plans to start “Bachelor Ryan” on the show, but Chris Harrison is kind enough to speak for ABC and put our minds at ease by announcing that such an occurence is “not going to happen.” Phew!

7. Sean may very well be the next Bachelor

OK, there was no official announcement. But based on the exorbitant cheers from the audience whenever his name was spoken and the way he was set up with questions as to whether he’s ready for love and how much he wants what his parents have — it seems pretty clear the network is pushing to get people excited about the possibility. Jef and Arie are pretty solid competition, though, so it seems we’ll just have to wait and see.

Throughout the show Emily has always come off as an honest and genuine person. And that straightforwardness certainly comes across when she tells Kalon exactly where he can stick his “apology.” Thanks to social media, Emily was well aware of the things he’s been saying about her and answered his false gratitude with — “You, my dear, should be a politician, because that is the biggest load of s**t I’ve ever heard.” She is one tough smart cookie — you certainly don’t want to be on her bad side!

9. Way more funny stuff happens on the show than we get to see

Getting to see The Bachelorette‘s relationships progress every week is great and all — but you know what the show is really missing? An hour every week dedicated to the show’s outtakes. There is no denying the truth of that statement after the blooper reel played tonight. Between falling objects, power outages and the occasional splash of nudity — a whole lot of hilarious stuff goes down that we aren’t privy to. And it’s a shame!

10. The finale is going to be intense!

There is no doubt that Sunday night is going to be an emotional roller coaster when Emily finally has to choose between Arie and Jef. The three hour season finale is one you certainly won’t want to miss!