Canadian mega pop star Justin Bieber has reached 25 million followers on Twitter. It may sound like a lot to you, but what’s important here is…
did he beat Lady Gaga? 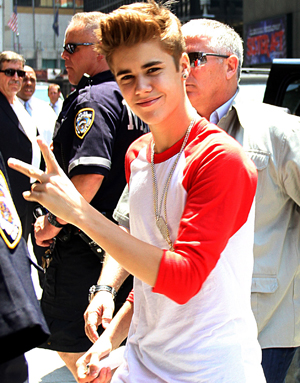 See, all it takes is just a little bit of beliebing…

Justin Bieber, with the help of millions of teenage girls and lusty cougars, finally reached the coveted 25 million followers on Twitter.

The battle of followers really began back in March when Biebs was dethroned by Lady Gaga as the most-followed individual on Twitter. Consequently Beliebers declared war on the Little Monsters.

When will the madness stop?

Sadly not anytime soon. Although J.Biebs reached 25 million followers, Gaga is sittin’ pretty at 27 million. But to put an end to this prolonged conflict, we have come up with a few tips to help our Canadian homeboy reclaim his position as an absolute sovereign of the Twitterverse.

Let’s face it: Most of Bieber’s followers are women who, whether on a conscious or subconscious level, wish he was their beefrend. So why not scratch that itch or pick that scab? Give the fans what they want: Bieber love. If Justin answers their questions, sends them messages, accepts their challenges, etc., the ladies will blab about it to other ladies, thus starting an endless chain of free publicity. And if Bieber spends less time working his eyebrow expressions and sultry pouts, he can easily boost his follower count.

This formula is as old as the world. Puppies and babies make everything cute — fact. Thus, if Bieber posts photos of himself with random pups and infants, his following will grow. It’s just basic logic, people. Tweeting videos of puppies sneezing or babies laughing works just as well.

All right, if you can’t beat ’em, buy ’em. This may not be the most ethical method of gaining popularity, but we are talking about a singer who rose to fame because of his dreaminess. Ethics were never a priority. We say, organize giveaways with amazing prizes (not Bieber swag) on a weekly basis. If that fails, throw that money like the vault’s on fire. Even Little Monsters have bills to pay…