Talk about the ultimate description of a modern family, huh? Michael Lohan may be known for accompanying Lindsay to nightclubs every once in a while, but now he’s got a new upcoming duty: full-time father to a new baby. 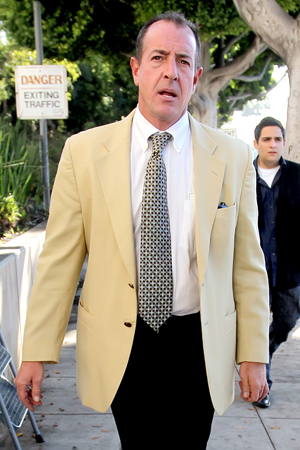 Lindsay Lohan is going to be a big sister to a new half-sibling.

The Liz & Dick actress’s dad, Michael Lohan, is expecting a child with his on-again, off-again girlfriend, Kate Major. TMZ reports that the couple, who has had a somewhat troublesome relationship, has confirmed they’re going to be parents to a new bundle of joy — they just haven’t told Lindsay or anyone else in the Lohan clan.

Well, I’m sure they all know now, Michael.

Sources tell the entertainment website that “Kate is in her first trimester.” Baby news is always a pleasure to hear in Hollywood, but this baby news is somewhat bittersweet, since Michael and Kate haven’t always been all that romantic toward each other.

In 2011, Michael was arrested for domestic violence against Kate and was ordered to stay away from his now pregnant girlfriend. Kate was eventually granted a restraining order against Michael, whom she once called “a liar,” according to The Sun UK, saying it would prevent him from “stalking” her.

However, it looks like the 52-year-old may have broken the law by getting, um, cozy with and impregnating Kate even though they were ordered to stay far apart from each other.

Well, despite all the legal stuff, here’s to the happy parents-to-be. Oh, and Michael: Maybe it would be a good idea to not go clubbing with your child when he or she’s older; it might save a whole lot of future drama.