Celeste Holm, the award-winning actress famous for her work on Broadway and onscreen, passed away in her New York home this weekend. 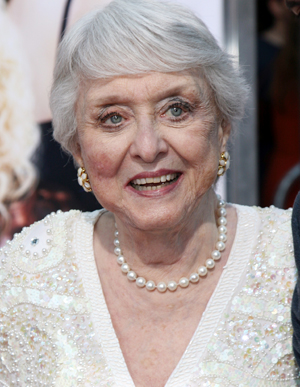 The amazingly talented and memorable actress Celeste Holm passed away yesterday at the age of 95.

The actress was hospitalized two weeks ago due to dehydration after a fire broke out in her apartment building in New York. Holm asked her husband, opera singer Frank Basile, to take her home on Friday. She died surrounded by her closest friends and family.

“I think she wanted to be here, in her home, among her things, with people who loved her,” said Amy Phillips, the great-niece of the actress.

Holm rose to fame on Broadway, first alongside Gene Kelly in The Time of Your Life (1939) and later as Ado Annie Carnes in the original 1943 production of the musical Oklahoma!.

Celeste won an Oscar for Best Supporting Actress for her role as Anne Dettrey in the 1947 film Gentleman’s Agreement, which explored anti-Semitism in postwar New York. She was also nominated for All About Eve, co-starring with Bette Davis.

Holm was estranged from her two sons, Ted and Daniel, after a prolonged legal battle over their inheritance, which left her dependent on Social Security. Neither of her sons was present when she died.

A tireless activist and charity benefactor, Celeste at one point served nine boards at the same time. She was an avid supporter of UNICEF and the Creative Arts Rehabilitation Center.

This woman had a grand presence and an even grander legacy. She will be missed. Condolences to all her family and friends.