It’s Comic Con season! This weekend, San Diego was held hostage by hobbits, ewoks and bikini-clad princesses of all kinds. We got to thinking about what it might be like if other subjects were given the kind of attention those at Comic Con receive. 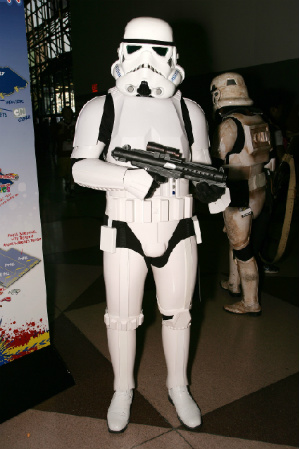 If you’re wondering why you just saw the fifth Darth Vader walk past you in one day, don’t worry — you don’t have heatstroke. It simply happens to be Comic Con season, when all the nerds emerge from their parents’ basements and proudly celebrate their geekdom. This weekend, the flagship Comic Con happened in San Diego, where superheroes, ewoks, hobbits, Klingons and more joined together in one sci-fi/fantasy/make-believe dream convention.

It’s actually a pretty remarkable thing, this Comic Con phenomenon. What started out as a relatively modest salute to comic books and fan fiction has exploded into a multinational event that draws huge numbers of people all looking to get their dweeb on. The Con features exclusive previews of new movies, TV shows and events, and celebrity sightings are pretty much a given. This year’s roster of stars included Anna Kendrick, Christopher Mintz-Plasse (a.k.a. McLovin’) and Tim Burton. With the enormous popularity — dare we even say coolness — Comic Con has acquired, it’s safe to say the revenge of the nerds was a mission accomplished.

Those geeks sure have taught us all a lesson in caring about something. We’re truly inspired by how passionate and knowledgeable people can be when it comes to Jedi and Elvish culture. But what about the many other obsessions that exist in the world that don’t get nearly the same kind of attention as the subjects at Comic Con? Don’t they deserve a giant celeberation too?

Enough people love the Kardashians at this point that they should really have their own enormous convention (even though the E! network is practically its own Kardashian convention already). We’re picturing lots of faux fur, black lace and mirrors. Maybe there might be a station that would teach attendees how to spend lots of money with no remorse, or a shotgun wedding chapel. And of course, a panel at which all the Kardashian clan would answer questions from eager fans. We expect this kind of convention would soon expand to include all Kardashian-style reality shows. The idea of the Kardashians being joined under one glorious roof by every Real Housewife and Bachelorette might be too much for us to handle.

Sure, Spider-Man and Superman may be getting lots of love at Comic Con, but what of their less remarkable cartoon cousins? At Comic Strip Con, people could unite over their love of Peanuts, Family Circus and Garfield, not to mention the many other comic strips that grace so many newspapers’ funny pages. Just because they don’t fly around and save the world doesn’t mean Charlie Brown and Marmaduke don’t deserve out public adoration. And that Little Orphan Annie needs all the friends she can get. It may not be as cool as regular Comic Con, but at least there is less chance of getting hit with a lightsaber.

Naturally this would have to be held in a prison, but that doesn’t mean it can’t be fun! Convict Con would be a celebration of all of history’s favourite criminals. From Bonnie and Clyde to Hannibal Lecter, all convicts would be included at Convict Con. Popular stations would include tips on how to break out of prison and a collection of hobbies to help the time pass more quickly.

While many people love them some Comic Con, there are others who can’t stand it at all. For them, there should exist a Con Comic Con Con. There, people could get together and discuss what it is about Comic Con they hate so much. No gripe is off limits; from the inauthenticity of everyone’s weaponry to the ridiculous inclusion of anime, Con Comic Con Con is where the true nerds would go to celebrate their pure, untarnished-by-pop-culture geekdom.