Oh please let this rumour eventually come true! Twilight stars Kristen Stewart and Robert Pattinson had a chance to act as parents in their upcoming Twilight film, and now their film experience may become real, after a source says the two are ready to move to the next step of their relationship: a baby! 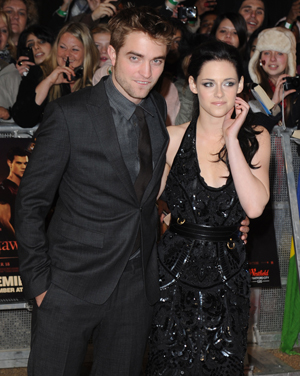 A Twlight baby for real? Pinch me — I must be dreaming!

Twilight stars Kristen Stewart and Robert Pattinson may have let their recent roles as new parents in The Twilight Saga: Breaking Dawn get to their twentysomething minds, because now they’re talking about the prospect of having children together. A source tells Us Weekly that the on-set and off-set couple has been talking about starting a family of their own one day.

“They would talk about how they would raise their own children,” says a source to the entertainment magazine. “Kristen would say, ‘Well, I’d never do this or that.’ Sometimes it would start off as a joke, but you knew they were really thinking about it.”

Ah, if there were ever a rumour Twi-hards would want to be true, this would be it! I mean, just imagine if Robert and Kristen did have a tot of there own. Not only would the little one be extremely beautiful, he or she would push all other celebrity babies out of the limelight.

You have to wonder, though, if there’s actually some truth to this rumour, or if it’s just a tacit way to promote the final Twilight film, which comes out November 16. But then, why would they need to promote the film like this? It’s already a well-known fact that Bella and Edward will take over the box office, especially since the world finally get to see Bella (and Kristen) as a vampire.

But back to babies.

Apparently Kristen also showed her openness to having a real baby bump of her own one day, after she was seen talking to an expectant mother at a friend’s wedding she attended with Rob.

“She thought it was so cool. At one point she touched the woman’s belly to feel the baby kick,” says the source.

Whether or not this rumour is true, Rob and Kristen should start coming up with some hybrid names just in case. What about Rob-Kris for a boy or Kristert for a girl? Hmm… Better leave the combination names to Stephenie Meyer.