With friends like these, who needs enemies? The Jersey Shore cast kindly took the privacy out of Snooki’s life and revealed her unborn son’s name to the world. Go team! 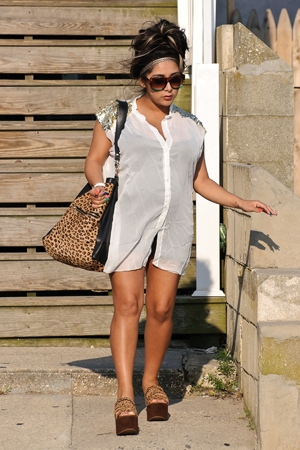 In their defence, secrets are meant to be told, right?

Although Snooki previously revealed she and fiance Jionni LaValle have chosen a name for their unborn son, it was the Jersey Shore ladies who spilled the beans to the press.

Here’s le scoop: During an interview with USA Today, Snooki’s co-stars shouted out the chosen moniker for the little one, despite JWoww‘s slight efforts to hush it up. Powerless, Snooki herself confirmed her son’s name is…

Lorenzo! And this wee one is due in September. What do you think of the name?

More important, what’s up with the treacherous behaviour of the Jersey Shore crew? Snooki is fully licensed to unleash mishegoss upon these baby-name droppers…

We have some devious ideas, just in case. How about three months of diaper duties? No better way to say “I’m sorry” than wiping poop off baby butt — guaranteed to teach a lesson. Or maybe a homemade, six-course meal for Jionni and Snooks to help them forget the trauma and invasion of privacy. Finally, nothing begs for forgiveness better than a new Porsche for those married-couple date nights. Agreed?

There ye have it. We’re slowly warming up to the idea of little Lorenzo coming into this world. How about you?

Jersey Shore‘s “The Situation” has “medication problem”
Is pregnant Snooki back in the Jersey Shore house?
Snooki quits tanning?