An odd proposition, but not for Katy Perry. The songstress was told by insurers that perhaps it’d be best if she stopped getting her hair caught in the adorable spinning peppermint costume bra. 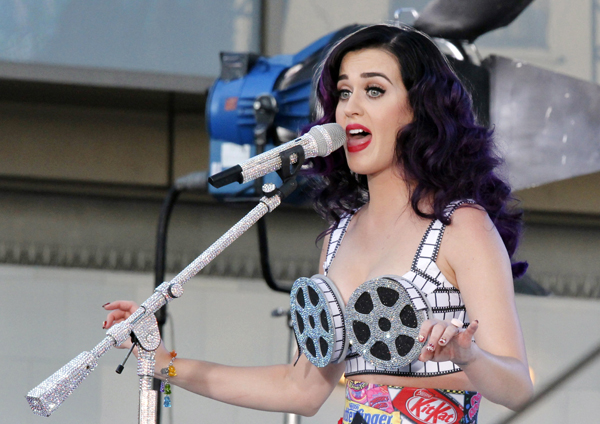 Oh man, this is almost as tragic as being forced to throw out your favourite toy!

Katy Perry‘s insurers have advised the songstress to chuck her spinning peppermint bra because her hair continually gets caught in it.

We don’t know what’s worse: the fact that Perry has a spinning bra or that we will never see it again.

The insurers fear the hair-caught-in-bra incidents put too much strain on Perry’s neck and may result in an injury during a performance. Does anyone else find this bizarre? Of all the issues in the world… Hair getting caught in a bra is obviously a priority.

“I keep being told the insurers are worried I will injure my neck. I seriously doubt it could be lethal, but they want a new bra designed that will not allow hair to be caught up,” stated Perry.

The spinning candy bra is featured in the singer’s new film, Katy Perry: Part of Me, and it’s her recognizable trademark. But here’s an idea: Perry should just wear her hair up… Problem solved, you’re welcome.

Safety seems to be a difficult concept for performers to grasp. Recently Justin Bieber walked into a glass wall, Lady Gaga was smacked by a pole, Kristen Chenoweth was bludgeoned by a hunk of filming equipment and now Perry might get a neck injury because of a bra? We need a safety Reformation in Celebrityland; let’s all convert to minimalism and curb the pain, yes?