Admit it — you’ve been wondering whether there will be a Magic Mike sequel… Well, Channing Tatum revealed the future of the film as well as a potential future role. 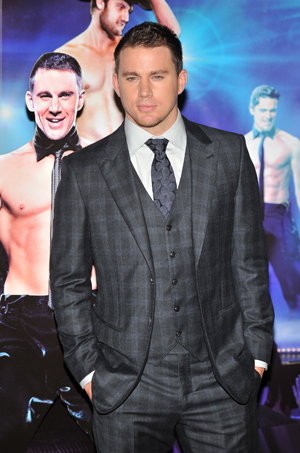 Does anyone even remember what Channing Tatum looks like clothed? Nope.

Luckily we don’t have to. The hunky actor revealed he has no intentions of putting them clothes back on, because a Magic Mike sequel is in the works!

Stay in your seats, ladies.

“We’re working on the concept now. We want to flip the script and make it bigger,” Tatum told Glamour U.K.

We’re listening. Wait — script, shmript, who cares? The story can be mediocre, characters underdeveloped, budget nonexistent… As long as the men are dancing in the buff, you’re guaranteed a success. Am I right, or am I right?

The problem would arise with the storyline, considering that in a sequel Magic Mike himself would have no reason to appear. But last month Joe Manganiello told Hollywood.com the next film will most likely be a prequel. Hence, Tatum ain’t going anywhere.

This is so exciting! In a year or two, we will be lined up again to watch Magic Mike 2, clutching our little bags of loonies and toonies to toss at the theatre screen… Oh, memories.

But there’s more: Going with the whole “nekkid” theme, Tatum also told Glamour magazine he would be up for the role of Christian Grey in a Fifty Shades of Grey film, but… only if his wifey, Jenna Dewan, will star as Ana.

“She’s read the books, so I don’t think she’d be impressed if she couldn’t be Ana!” the actor stated.

Oy. That would be so bizarre, starring in an explicit film with your wife… for all to see… No? We say hire Jessica Alba, and get filming.