We didn’t even know straight marriage was in trouble, but Kirk Cameron is ready to fight for it! The actor created a video for the National Organization for Marriage to promote his views on the marital institution and its enemies. Brace yourself. 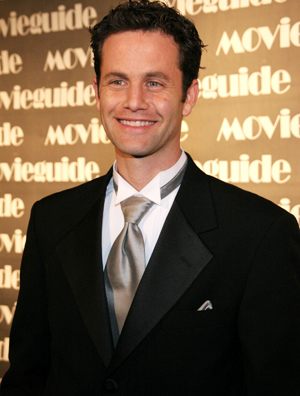 A person can spend most of their life trying to unravel the mysteries of this world and the perplexity of human nature, but it takes only Kirk Cameron and the National Organization for Marriage (NOM) to blow your progress to smithereens.

The Growing Pains actor has teamed up with “Team Devolution of Human Rights” (though they prefer to be called Marriage Anti-defamation Alliance, a branch of NOM) to make an educational video infomercial modestly titled, “Champion of Marriage: Kirk Cameron,” which teaches us the importance of the marital union and God’s will.

The video opens with MADA spokesperson Damian Goddard pointing out Cameron’s persecution by the mainstream media and how he’s “mercilessly subjected to an unreasonable amount of scrutiny” for previously stating his views on gay marriage. Yes, it is quite unreasonable. You may remember that Cameron stated on Piers Morgan Tonight back in March that homosexuality is “detrimental and ultimately destructive to so many of the foundations of the civilization.”

We think he may have confused “homosexuality” with “intolerance.” It happens — they’re very similar words…

In this new video for NOM, Cameron is very careful not to drop the G word, and instead emphasizes the world God has outlined for us.

“God makes it really clear that society and civilization is really held together by the glue of families. I mean, this is where the next generation of human beings are incubated and nurtured and matured — in homes, in families. And so, we want that to be a place of health and happiness, a place of joy and forgiveness.

“So, when a man and a woman come together and they say ‘I do,’ they are committing for a lifetime to love each other and to model what love is and what forgiveness is and what joy is to their kids.”

Last time we checked, the divorce rate among Christians is also over 50 per cent. Regardless, GLAAD president Herndon Graddick thought something was a little off about Cameron’s message too:

“Kirk Cameron and the anti-gay activists at NOM are making a claim that Americans know to be false,” he stated. “This rhetoric won’t work anymore. Communities across this country love and cherish their LGBT neighbors, friends and family members. This includes people in families headed by LGBT people. Their implication that LGBT couples can’t create loving and stable homes is not only outdated and irrelevant, it’s designed specifically to hurt those families.”

Just something to think about. Kirk Cameron needs to drink some camomile tea and stop waving his “marriage messiah’ flag. Opinions?

Champion of Marriage: Kirk Cameron
The National Organization for Marriage has released a video labeling Kirk Cameron “one of America’s most important champions of marriage.”

Homophobic celebrities getting a taste of their own medicine
There’s lots to be proud of during the month of Gay Pride
Male celebrities are at a disadvantage, thanks to biology