Engaged or not engaged, that is the question. Well, as of right now, it is not engaged for Modern Family’s Sofia Vergara, after reports have come out saying the sexy actress’s boyfriend did not pop the question. 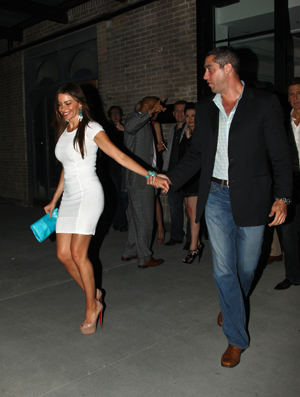 Is she engaged or isn’t she?

Modern Family star Sofia Vergara is causing a lot of confusion in celebrity land after new reports have come out saying the Colombian bombshell is not engaged to her on-again, off-again boyfriend of four years, Nick Loeb. Yesterday it was reported that Nick popped the question to Sofia while in Mexico on her 40th birthday, but her rep tells TMZ Sofia isn’t engaged.

“As of today, Sofia is not engaged,” says Sofia’s rep in a statement to TMZ.

She’s not engaged? Then where did she get that big rock she’s been pictured with, and why is it on her marriage finger? Though these questions remain unanswered, it’s possible Nick may pop the question very soon, since a source tells Us Weekly that he has been shopping around for engagement rings.

“He was looking for engagement rings last week. He looked at a bunch of places,” says the source.

Oh no, what if Nick was getting ready to pop the question this whole time, and now these rumours have spoiled the surprise? That wouldn’t be good, would it… But whether Sofia and Nick do get married, it’s nice to see the 40-year-old actress is smiling, having fun and happily back together with Nick. The two split up in May, but reconciliation rumours began to swirl after they were spotted in New York City, enjoying what appeared to be a lovely evening together.

Well, if you are going to propose, Nick, now’s the time, since there’s no pressure. But don’t wait too long, because we’re sure a lot of men would love to become Sofia’s husband and start their own modern family.