Why, oh why is there always a shakeup on reality show judging panels? First American Idol, then the Voice, and now So You Think You Can Dance. Yes, the reality dancing show may get rid of veteran judge Mary Murphy after her lawsuit has reportedly caused the show’s declining ratings. 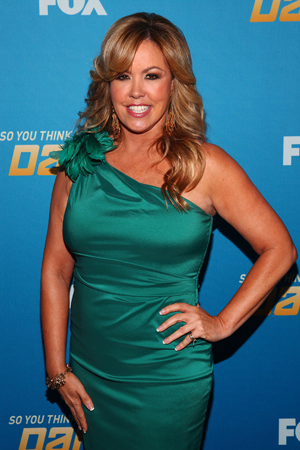 Mary Murphy may not feel like getting on the hot tamale train after hearing this news.

The So You Think You Can Dance judge and former dancer may be booted from the judging table next season due to her legal drama, according to RadarOnline.com. The entertainment website claims that Mary, whose positively enthusiastic attitude and shrill scream has entertained viewers who tune in to the hit reality dancing show, will be replaced by former recurring show judge and choreographer Mia Michaels.

“Executives are going over options because they’re furious that Mary has allowed a minor legal dispute to derail the success of the show,” says an insider to RadarOnline.com. “Behind the scenes, they have talked about what to do, and Mia replacing Mary is plan B if the struggling show gets another season.”

Replace Mary? That is just so no go, especially for avid fans of the show and dancers who try out and know Mary is one of the nicest and most encouraging judges in the world of reality television competitions. But even though Mary is always positive on the show, the television personality still faces a hefty and damaging lawsuit. If you recall, in May her former manager, Michael Sanchez, filed a $1 million lawsuit against Mary, claiming she hadn’t paid him, and Michael even suggested that Mary took drugs, calling her “cocaine-fueled.”

Not very nice words, that’s for sure.

But apparently the scandalous lawsuit is being blamed for season nine’s poor ratings, and that’s why the reality talent show’s executives are eager to shake up the show’s dynamics a bit.

“They blame most of the show’s viewership decline on the Murphy scandal and have discussed dumping Murphy if she doesn’t clean up her mess,” says the source. “If the show doesn’t get cancelled, Mia will definitely be coming back in 2013.”