As President Obama gears up for game time and heads into the thick of his presidential campaign, another fierce campaign is occurring simultaneously among Hollywood celebrities: the race for who will be Obama’s best friend. 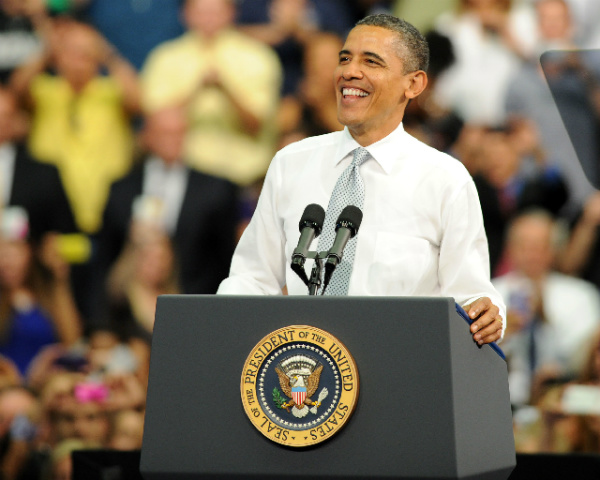 The American presidential race is going to get pretty wild in the very near future. As the finish line comes into sight, President Obama and his Republican competitor, Mitt Romney, will give us a show athletes of the 2012 Summer Games only wish they could deliver. And while our eyes are on the two men vying for the leadership of the free world, there is another, if not more exciting, campaign occurring parallel to the presidential one: the celebrity campaign to be Obama’s best friend.

It’s no secret that celebrities favour President Obama more than the average presidential contender. Since his first campaign, stars have stood proudly behind Obama, lauding him for the sorely needed change he would bring to America. Their support has far from wavered now that he’s running for a second term, and many of them are showing their support in various ways: contributing to his campaign, speaking openly about voting for him, encouraging others to join Team Obama. However, some stars are going above and beyond the call of presidential support duty by throwing President Obama and his family extravagant fundraisers that cost thousands of dollars to attend. Sure, it’s cool to be recognized by the president as someone who supports his cause, but it’s cooler to be his buddy, whose support knows no bounds. Not just any friend: first friend.

The three frontrunners for first friend are George Clooney, whose $40,000-a-ticket fundraiser included such high-profile guests as Barbra Streisand and Robert Downey, Jr.; Sarah Jessica Parker, whose swanky New York City fundraiser was co-hosted by Vogue editor-in-chief Anna Wintour; and Gwen Stefani, who is teaming with first lady Michelle Obama herself to host a family day fundraiser. Each one is deserving of the title for different reasons, but because America is a democracy, first friend must be chosen through a vote. Luckily we were able to acquire excerpts from campaign statements made by George, Sarah and Gwen that explain why the American public should vote for each of them. Unfortunately since we are in Canada, we cannot participate in the selection process. But it’s all right, since this vote is not for real. Based on these short statements, who would you vote to be first friend?

I could simply say you should choose me because I’m George Clooney and leave it at that, but it would be unfair of me and a little unprofessional. Listen, I am a cool older man. I make other men look cool. I’m the kind of guy you want the president to be associated with. You don’t want your president hanging out with losers; it makes him seem like a loser. I’ve got a villa in Italy. I have a yacht. I am fabulously decorated and celebrated for my contributions to the film industry. I have so much money. Can’t you just picture Obama and me laughing for the cameras and smoking cigars while we hang out in the Oval Office? Choose me.

Kim Jong-un. Mahmoud Ahmadinejad. Stephen Harper. What do these controversial world leaders have in common? They are tragically unfashionable. Barack Obama, on the other hand, is a person who understands the importance of fashion and making a true statement no matter what boring speech he’s giving. I, of course, am the same way. Vote for me as first friend, and by proxy, our president will exceed all expectations as the most fashionable world leader there is. Think of how much greater he stands to be with just a little more Gucci in his life.

I am a person whose family means everything to me. Every decision I make revolves around the well-being and interests of each of my family members. I believe this makes me the perfect candidate for Obama’s first friend. The president adores his family as well, relishing every opportunity he gets to spend time with them and considering them in the many major decisions he makes. As first friend, our two families could unite and become one huge, loving family. And once he’s in the familial spirit, you can bet Obama will be more protective than ever of his biggest family, which you all are a part of: America.

Oprah saves dad’s barber shop, buys it back for $475,000
Everything about Texas is huge
Princess Diana documentary shelved