The Fantasy Suite episode is typically an occasion for the Bachelorette to enjoy some sexy, private time with each of the final three men. As a mother and role model, however, the Suite invitation is more of an opportunity for Emily Maynard to emphasize her values and intentions than to give in to frisky business. 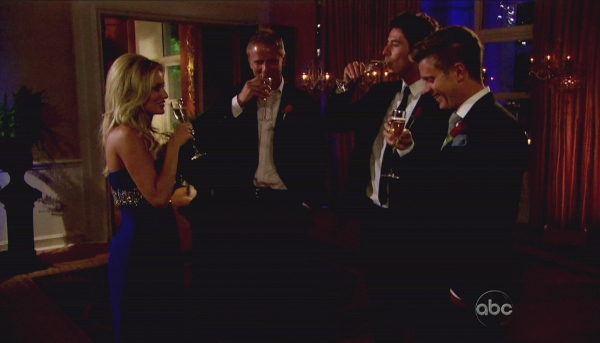 Sean’s all over it!

Throughout the show, Sean has been the epitome of a true gentleman, but tonight he proves those rippling muscles don’t come from a lack of testosterone when he eagerly accepts to spend the night in the Fantasy Suite. He does, however, graciously accept her later decline to spend the night. There’s no denying that Sean is a great guy, but he and Emily just don’t seem to have the same chemistry she has with the other two. Don’t be too sad, though, Sean. There is no doubt offers for The Bachelor and Bachelor Pad will come flying your way!

Jef may have seemed like the kind, funny guy for most of the season, but tonight he shows he isn’t afraid to ask the serious questions when they count. And after the tough talk comes the Fantasy Suite invitation. He shows he truly understands the type of role model Emily wants to be and respectfully declines the opportunity. This may very well be the first time in the show’s history that a guy has turned down the Fantasy Suite, but as he adorably explains, there’s a time and a place for everything, and, “I plan on spending every night with you in our own little fantasy suite.” A gentleman and a romancer… Does it get any better?

There’s no denying that Arie and Emiy’s kisses are downright squeal-worthy, but are they enough to build a relationship on? Maybe not, but the fact that he reveals later that he has thought long and hard about how he could fit in to Ricki’s life on her terms certainly does. By the end of the date, Emily is so smitten, she doesn’t even offer him a Fantasy Suite invitation because she’s worried she won’t be able to say no. Now that’s chemistry! Emily puts it best when she states, “Good lord, he’s hot.” You can say that again!

Emily may seem like the ideal Bachelorette based on how drop-dead gorgeous she is both inside and out, but that inner beauty makes her role as heartbreaker a hard one for her to cope with tonight. Which is particularly understandable when you look at the incredible final three she’s narrowed it down to. When all is said and done, it’s Sean she decides to tearfully say goodbye to. For a few weeks now, it has seemed quite likely that Jef and Arie would be the final two, but what happens now? Emily definitely has her work cut out for her with two such sweet and charismatic guys. Stay tuned for the exciting finale on July 22, when all will be revealed!