This franchise keeps us on our toes. The newest cast addition is Philip Seymour Hoffman, who has accepted the role of Plutarch Heavensbee after all. Yay or nay? 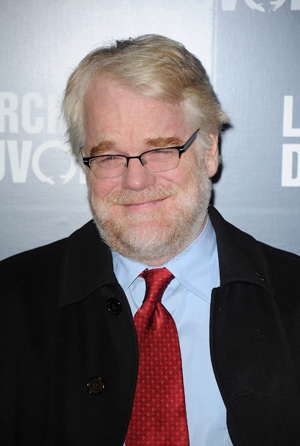 As mentioned before, Philip Seymour Hoffman was considered for the role of Plutarch Heavensbee (new head gamesmaker) in the upcoming HG sequel, Catching Fire. Now you can safely cradle those Suzanne Collins novels in utter serenity, because…

It’s been confirmed! Hoffman is on the choo-choo train to the Capitol.

That’s one great addition to the cast and one less role for the producers to worry about. Hoffman is versatile and all-around amazing, so we award three golden stars to the casting folks at The Hunger Games. Initial reactions?

The other big role — which has got all the ladies secretly weeping from anticipation — is the District 4 winning tribute, Finnick Odair. The word on the street (and by “street,” we mean geeky forums) is that Armie Hammer, Taylor Kitsch, Robert Pattinson and Garrett Hedlund are being considered for the role of this Mr. Hunky Yummingston.

Well, this is the latest news from the Districts. Who do you think should play Finnick, and are you happy with the casting choices so far?