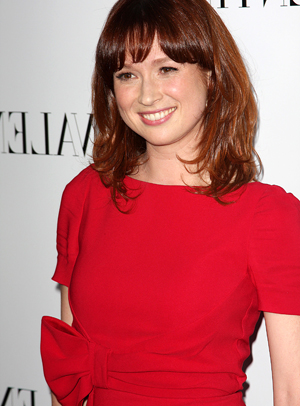 Bridesmaids star Ellie Kemper was the bride this time, as she walked down the aisle and married former Late Night with Conan O’Brien writer Michael Koman.

The ceremony took place in New York this Saturday and was attended by celebrity friends, such as Bridesmaids‘ co-star Kristen Wiig and Mindy Kaling from The Office.

Kaling sent out a cute “hollaaa” to Kemper via Twitter, saying, “Today a member of the only fictional band I’ve ever been in is getting married. Not @edhelms or @bjnovak, the lovely Ellie Kemper. Xoxo”

Kemper announced her engagement to Koman back in December and was famously thrown a bachelorette party on The Ellen DeGeneres Show, complete with a stripper. Can life get any better than that? We didn’t think so either…

Aww… Just picturing Ellie walking down the aisle brings tears to our eyes. She’s so cute — don’t you just want to carry her around in your pocket? No? Just us?

Regardless, congratulations to the happy couple! Where are we going for our honeymoon?

In memoriam of some of SNL‘s dearly departed characters
Kristen Stewart is the highest-earning actress!
Hollywood, as viewed through a high school lens