He has been there for our entertainment, and now Adam Lambert may be moving on to bigger things in his music career. The Grammy-nominated artist has been named as a possible replacement for the American Idol judging table for season 12 of the hit reality show. 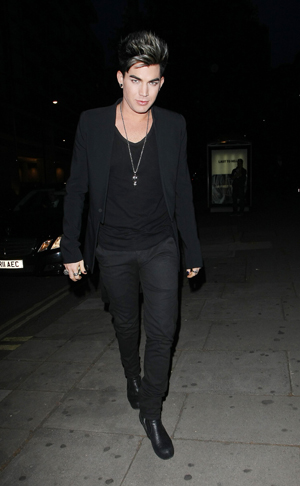 American Idol viewers, get your black eyeliner out, because Adam Lambert is coming to the judges’ table.

The American Idol alum and “For Your Entertainment” artist may be moving up in the ranks of the music industry as a possible judge for season 12 of the talent show, according to E! Online reports.

Yes, Adam may be a judge for the same reality show on which he got his big break. Talk about turning the tables completely, huh? A source told E! News that the 30-year-old is exactly what the show needs, after Jennifer Lopez revealed she might not return to the judging table for a third season.

“He personifies the show and will be a popular choice right from the start. He knows what it’s like to be on the receiving end of the judges’ comments, he has a human touch, and they know they can’t go wrong if they bring him on,” says the source. “He would be able to bring a unique perspective to the show. People love him.”

Who doesn’t love Adam Lambert? I mean, his jet-black hair, his eccentric style and his perfectly lined eyes are what make him such an interesting entertainer, not to mention his great music, of course.

The source also tells the entertainment website that Adam has been in talks with American Idol for “over a month” and that Idol may have its own X Factor-esque judging drama, with veteran judges Randy Jackson and Steven Tyler possibly bowing out from behind the judges’ table as well next season.

“As of this moment in time, we are still in negotiations, as we are with everybody. Everything is up in the air,” says the show’s creator and producer, Nigel Lythgoe, who would like to see the whole team back at the table. But Nigel notes that the show must go on, whether or not Jennifer, Randy or Steven decide to stay.

“There will be changes, for sure, but nothing that stops it from what it is, which is an out-and-out talent show.”