Niall Horan should think twice about using tongue-in-cheek slang while in public — or at least teach his non-British fans all the slang from his country. The singer got himself in hot water for using a phrase that has surprised his fans all around the world. 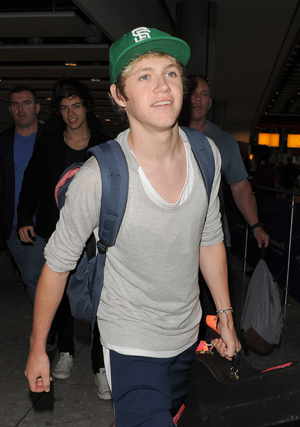 Uh-oh… Looks like Niall Horan may need his mouth washed out with soap after making some not-so-nice comments.

The One Direction band member may have taken his sweet, British boy-next-door demeanour too far in the wrong direction when he made a foul comment to his adoring fans at the Dublin airport after they asked him to record a birthday message for their friend. According to the Daily Mail, fans uploaded a video of Niall saying to his fans: “Remember the last time I walked out here? You shower of c***.”

Yup, he said the C word — the word that is hardly ever uttered in public in North America unless you’re using it in a derogatory way or you’re Samantha on Sex and the City. But apparently it is a very common term across the pond, since the 18-year-old singer says he didn’t mean to be crude.

“Really sorry if I caused any offence. It was just banter with fans who I think of more as mates,” apologized Niall via his Twitter. “But I understand that it’s not a word I should be using at all.”

Calling fans the C-word is banter? Well, we definitely need to brush up on our British slang.

Apparently the fans to whom Niall directed his comment and who uploaded the video continued to talk with the teen heartthrob; they said they weren’t offended by his comment.

“In Ireland “shower of c***s” is used as “a group of annoying people,” but in a joking way. You say it all the time. It really isn’t offensive.”

OK, well, as long as no one’s feelings were hurt, it’s all good.