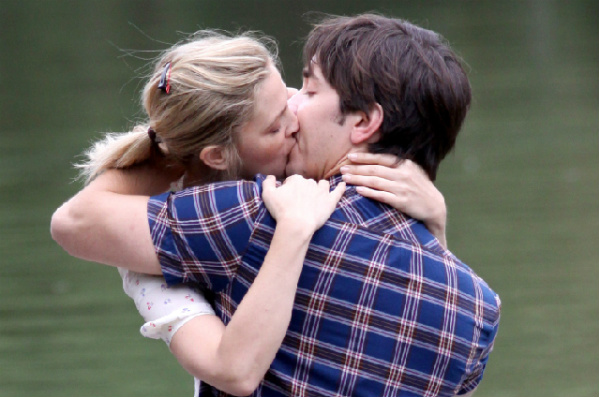 Bust out the ChapStick and Binaca, ladies: It’s International Kissing Day! That’s right. Everyone’s favourite pastime has been given its very own day of the year. So grab your partner — or even a complete stranger — and celebrate Kissing Day by planting them with a great big wet one.

In between games of tonsil hockey, many people might celebrate Kissing Day by watching some of their favourite onscreen kisses on repeat. Nothing quite gets you in the mood to make out than watching beautiful people do beautiful things to each other’s mouths. But for every rain-drenched, unbridled Notebook kiss or sensual upside-down Spider-Man smooch, there is an awkward, sparkless and sometimes even cringe-inducing kiss to remind us that kisses aren’t always perfect. International Kissing Day stands behind all kisses, and we at SheKnows stand with it. Kisses are kisses, no matter how flawed, and even the ugly ones deserve recognition on this joyous day. So instead of listing our favourite film kisses of all time, we’re going to pay lip service to the worst movie kisses ever. Bring on the sloppy, the tight-lipped and the inappropriate: All kisses are welcome here!

At the time of its release, it was a pretty big deal watching two young men make out in the hetero male-worshipping dudefest that is American Pie 2. Even over a decade after the movie came out, the scene in which Stifler (Seann) and Jim (Jason) kiss remains its most memorable. And for good reason: That kiss, which the two characters suffer for the sake of a “like for like” game being played with their two promiscuous female neighbours, is the epitome of awkwardness. Both boys lean in with repulsed scowls, and despite trying to sexy it up with a little open lip action, it’s clear how very unhappy Jim and Stifler are making out with each other. But it’s all worth it to watch two chicks kiss, right? We get it: You’re straight.

Mia Kirshner and Beverly Polcyn, Not Another Teen Movie

This one ranks as perhaps the messiest kiss in film history. Of course this kiss, shared between the characters of Catherine (a.k.a. the meanest girl in school) and Sadie (an elderly woman on undercover assignment, posing as a teenager), is meant to be as nauseating as it is. The scene is a parody of a far sexier one in Cruel Intentions, in which Sarah Michelle Gellar’s very sexually experienced Kathryn teaches Selma Blair’s virginal Cecile how to kiss. It features an extreme close-up of the two actresses’ lips going at it, and we see an unglamorous hint of some lingering saliva as they pull away. What we get in Not Another Teen Movie is that sloppiness to the extreme, complete with strings of swapped spit and rogue tongues. Despite how ill it makes us feel, though, it is still a kiss, and we proudly celebrate it on Kissing Day. We just aren’t going to watch it.

Garth Algar is an adorable, socially inept character who has serious trouble when it comes to women. When the woman of his dreams — Honey Hornee, whom he meets at the laundromat — pays him some romantic interest, Garth can barely contain himself. It’s one of the funniest first kisses to watch: Honey, played by a sexed-up Kim Basinger, is confident and seductive, while a terrified Garth, played by Dana Carvey, desperately tries to figure out what to do with his lips. Even after the moment of contact, Garth’s mouth is moving a mile a minute and his eyes are wide open, while Honey’s lips are softly parted, her eyes gently closed. We encourage you to rewatch that hilarity as many times as you want.

In this movie that sends up the promscuity of teenagers at summer camp, heartthrob Andy, played by Paul Rudd, and camp slut Lindsay, played by Elizabeth Banks, are the king and queen of PDA. They share a number of completely inappropriate kisses, treating each other’s faces like salt licks. Watching them go at it might make you want to avert your eyes, or it may bring back nostalgic memories of your reckless days at summer camp. Either way, we salute these characters’ public, if not slightly pornographic, displays of affection on this, the day of kissing.

Summer movies to enjoy in your air-conditioned home
Is not wanting kids in Hollywood a career threat?
Claire Danes is pregnant!