As is customary during the baby season, we welcome the newest addition to the Hollywood family. Jackson Rathbone and girlfriend have welcomed their first child together. 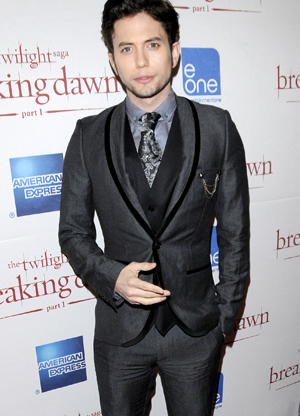 Well, hopefully this little tyke does not have red eyes or glittering skin a la Edward Cullen…

Twilight star Jackson Rathbone and girlfriend Sheila Hafsadi have welcomed their first child together, a baby boy. He was born yesterday morning and weighed in at 8 pounds, 11 ounces.

But this is the best part… The little one’s name is Monroe Jackson Rathbone VI. While you might think, “Gee, what a pretentious name! The sixth. Really?”

“Thank you ALL for the love & support! Sheila & I couldn’t be happier to have such a beautiful, healthy baby boy, Monroe Jackson Rathbone VI,” Rathbone tweeted yesterday. “Feeling so blessed! What an amazing day! Love and respect, Bone Daddy.”

Now his days will be filled with baby powder, mashed peas and stink-tastic diapers. We hope he’s as excited as we are.