Oprah is showing us once again that even though she’s one of the richest women in the world, she is generous and always there for her family and friends. This time the daytime talk show queen saved her dad’s business by purchasing it back after the bank foreclosed on it. 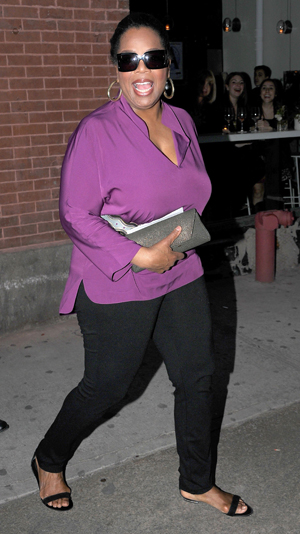 Oprah definitely takes the phrase “we are family” to heart!

The daytime talk show queen is showing everyone just how generous she can be, but this time the generosity was directed toward a close family member of hers.

According to RadarOnline.com, the OWN head honcho has reportedly bought her father Vernon’s barbershop in Nashville after the shop was foreclosed by the bank and auctioned off. The report claims that Vernon Winfrey and Oprah’s stepmother, Barbara, had bought a new building and moved the business there, but unfortunately the establishment didn’t bring in enough cash, causing Oprah’s daddy to auction off the place because he couldn’t afford the $481,000 bill from the bank. Luckily, though, Oprah was the bidder and won back the barbershop for $475,000.

Aww, how sweet of Oprah! I’m sure she would have bid any amount to help her dad. But although the television entrepreneur’s generous rescue was done as a good deed, apparently her stepmother thinks Oprah had no right to buy back the place.

“I know what is going on. I’m tired of it, and I’ve had enough,” says Barbara to WSMV-TV via RadarOnline.com.

But wait… She bought back the shop to help her dad. Isn’t that a good thing? Barbara says Vernon’s letting his daughter buy back his business was not a good idea, and while Barbara may not have meant any diss to Oprah, it looks like Vernon and Barbara are no longer together, as Vernon filed for divorce on Tuesday.

Wow, what a turn on a positive situation, huh? The entire incident is somewhat bittersweet for the whole family.

Dear Oprah, may we show you around?
Oprah not “desperate” for OWN ratings
Is Oprah giving Maria Shriver her OWN reality series?