The expression “be careful what you wish for” is becoming more and more true for Katie Holmes, as the actress apparently hinted she was ready to take her life in a whole new direction prior to announcing her divorce from Tom Cruise. 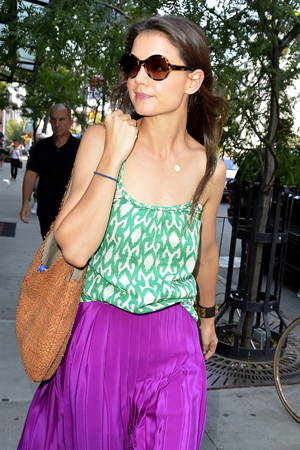 Did Katie Holmes foreshadow her own divorce?

That seems to be the new speculation surrounding the Katie and Tom Cruise split, which was announced last Friday and is said to be slyly hinted at in an interview the actress gave for the upcoming August issue of ELLE magazine. According to New York Post’s Page Six, Katie, who gave an interview with the women’s magazine to talk about her shared fashion line, Holmes & Yang, said she wasn’t just the wife — well, now former wife — of the insanely talented and popular Rock of Ages actor, but also an actress with her own aspirations for her life.

Well, Katie is definitely sure about what she wants in her life, isn’t she? People may think this is her way of not being known only as Mrs. Cruise, but maybe she really just wants to enjoy her career and the path to wherever it takes her. Though the 33-year-old mom to adorable Suri was married to Tom, the excerpt reveals that Katy didn’t get any free rides because of her connection to his stardom.

“Things are not handed to anyone,” Katie says. “If anything, you work a little bit harder when you’re in such visible circumstances.”

Whether Katie hinted at the demise of her marriage is still not clear in the interview, but we know one thing is for sure: Katie is ready to fly in her career. And that’s OK, as long as she doesn’t mind that her Dawson’s Creek fans still call her Joey. Sorry, Katie, you just can’t run away from that title.

Are Tom Cruise and Katie Holmes dunzo?
Debra Messing files for divorce
Heidi Klum steps out on the town for the first time after split