Katy is proving time and time again that she is a strong, powerful songstress who is headed to reach the top, no matter how long it takes. But singing isn’t the only thing important to the Part of Me singer. Find out what she says about motherhood and why she is looking forward to the future. 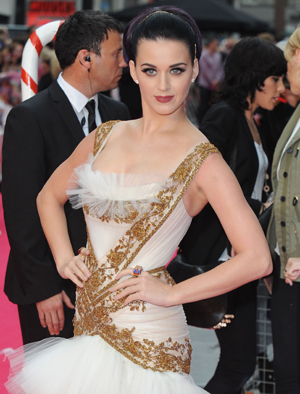 She has conquered music, acting and making her own movie. So what’s next for Katy Perry?

A family, of course!

But not for some time, since this California girl is focusing on her music career and her life, both of which we, the entire world, get a chance to see in her 3-D documentary, Katy Perry: Part of Me, which comes out today! Yes, Katy lovers finally get a behind-the-scenes look at Katy’s eccentric costume wardrobe, including her spiral-mint-candy corset, her infamous whipped-cream-spraying bra and her bright blue signature hairdo (before she turned it to her now dark look).

The “One That Got Away” artist has been all over the world promoting her honest and revealing flick, and in her most recent interview with The Sun UK, Katy shows she has a maternal side she hopes to one day share with someone special.

“When I decide to become a mother, I will just be that. That will be really important to me,” says Katy. “I want to be delicate with that situation, because I will finally have someone’s life in my hands.”

It’s great that Katy wants a family one day, despite her unfortunate split with comic Russell Brand in December after 14 months of marriage. The 27-year-old also holds an optimistic attitude when it comes to her future, saying she’ll never record an album based on heartbreak: “I’m happy. I’m in a good place.”

Good for you, Katy. Only bring on the good karma!

And for those of you out there who think the songstress has had an easy life (not including her divorce, of course),  you are completely wrong. Katy doesn’t let her head swell from all her fame and success, and she says it’s because she stays true to her music.

“Ever since I was younger, I wanted to be on stage, singing my songs in a glittering costume. And that happened and is still happening,” says Katy. “I have to remember that this is what I wished for and be grateful because, there are 500 other girls right behind me that are ready to snatch it up.”