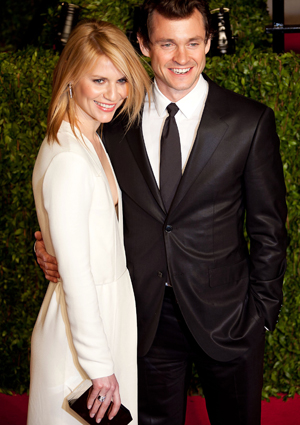 Would you Claire to Dancy? (That was a failed attempt at a play on words — apologies.)

But to segue to the actual news: Claire Danes and Hugh Dancy are expecting a baby!

That’s a Hugh-ge announcement, no?

The couple met in 2009 during the filming of Evening in France. They were engaged and married that same year. This is their first child together.

While we’re talking about this cute couple… Danes’ show Homeland has been renewed for a second season, and Dancy will be starring in the new NDC series, Hannibal. So, they’re keeping busy. Can the two handle baby troubles at the same time?

Now onto the deliciously juicy parts… What shall we name their baby? Whether it’s a boy or a girl, it has to be posh (to match Claire Danes and Hugh Dancy; both sound like royal family members). Something like Elliot or Edmund, maybe Matilda or Eleanor… Yes?

We digress… Congrats to the happy couple. Stay tuned for them updates.