Brad Pitt’s younger brother, Doug Pitt, has been endorsed by Virgin Mobile Australia for no other reason than the fact that he is Brad Pitt’s brother. It must be nice to have a sibling establish your celebrity for you. 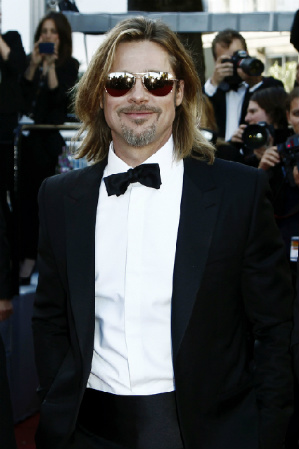 Here’s a new one: Doug Pitt, Brad Pitt‘s younger brother, has been sponsored by Virgin Mobile Australia as a way to “make things fairer in the Pitt family.” Doug, who is featured in a two-minute video uploaded by the company, takes viewers on a tour around his home and shows us the many unglamorous things his life consists of: listening to rock and roll from the ’70s in his “man room” on headphones, since his family doesn’t share his appreciation for it; fixing a lasagna in the kitchen; and trying to start a stubborn lawn mower. Virgin Mobile Australia wishes to offer Doug the opportunity to experience the same kind of lifestyle as his superstar brother as part of its “celebrity deals at celebrity brother prices” campaign. And now that the video has received 250,000 (and counting) internet views, it looks like Doug is well on his way to stardom.

The video, which is a pretty ingenius marketing idea, is obviously meant to be taken lightly; we aren’t under the delusion that Doug Pitt is actually vying for as much celebrity as Brad receives. Of course, he could if he wanted to, especially now that he’s about to experience 15 minutes of fame that, based on his obvious comedic inclinations and eye-pleasing Pitt genes, he could easily extend for much longer. It wouldn’t be the first time a celebrity’s sibling took advantage of momentary media attention and rode the coattails of their famous family member to their own fame and fortune. Let’s take a look at some of the stars who owe most of their fame to their celebrity siblings.

No one would have cared for a moment who Ashlee Simpson was if she hadn’t been the sister of Jessica Simpson, then the biggest reality star on television. Ashlee was granted media attention after appearing on Newlyweds — Jessica and Nick Lachey’s reality show — and before she knew it, she had her own show and had signed a record deal. Since then, Ashlee has steadily earned her own following as the rebellious younger Simpson sister. Her celebrity was tested when she was caught lip-synching on Saturday Night Live, but she’s proven she is now established enough to sustain her stardom.

What person could ever count herself grateful for her sister’s sex tape going public? The Kardashians can! Thanks to that infamous recording, Kim and her family found themselves the subjects of what is now one of the most popular reality shows around. Keeping Up with the Kardashians revolves around the crazy family life the Kardashians lead, with an emphasis on sisters Khloe, Kim and Kourtney. Both Kourtney and Khloe have enjoyed successful spinoff shows thanks to the extreme popularity they’ve racked up on Keeping Up, and are now each independently famous. Based on how completely ubiquitous Khloe and Kourtney are, with tentacles in everything from the entertainment industry to the fashion world, it looks like Kim’s sisters are going to be staying well beyond what was expected to be a mere 11 minutes of fame.

For a time, Dakota Fanning was the most talented little blonde girl in Hollywood, whose talent and professionalism could not be matched by any child actor. Then Dakota started getting bigger, which meant she couldn’t play the little girl roles she once could; her maturity was catching up to her. When it comes to child actors, Fanning is a name producers can set their watches to, so it was no suprise when Dakota’s sister, Elle, started popping up in movies in little girl roles. As it turns out, both Fanning girls were blessed with an unfair amount of talent, and Elle has proven herself as impressive an actress as her older sister. Lucky for them they didn’t have a Baldwin situation on their hands.

Back in 2002, Britney Spears was at the height of her game: She was starring in her own feature film, Crossroads, her music career was in full swing and she was ranked by Forbes as the world’s most powerful celebrity. It was a good time to be Britney’s little sister. Nickelodeon certainly thought so, and the network signed Jamie Lynn Spears to star in its hit show All That and then as the star of Zoey 101. Jamie Lynn soon became a huge tween star and a bona fide celebrity in her own right, but that was all put on hold when she got pregnant. Now a mom, she’s slowly emerging once again onto the scene, coincidentally at the same time big sister Britney is making her 26th comeback as a judge on X Factor.

Anderson Cooper grateful for the support
Kelly Clarkson in a wheelchair! What happened?
Kim and Kanye visit sick kids