Just in time… We were about to have a heart attack from all the drama. Lindsay Lohan’s newest film, Liz & Dick, has finished filming. Are you excited? 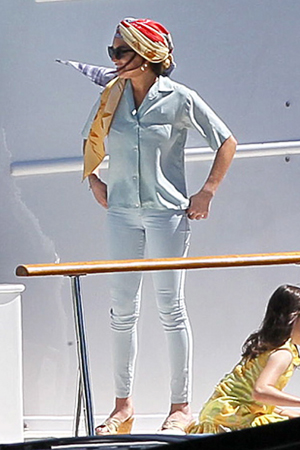 We shall expect no more adventures from Ms. Lohan whilst filming the Elizabeth Taylor flick, because it has officially wrapped up.

Yup, the production team of Liz & Dick can rest easy now; no more car crashes or fainting fits from Lindsay Lohan (who is a newly branded 26-year-old!).

“We have wrapped principal photography on Liz & Dick, and Lindsay Lohan and Grant Bowler’s performances are picture perfect,” the film’s producer, Larry Thompson, told E! News. “The cinematic drama of the Elizabeth Taylor and Richard Burton love story which unfolds onscreen is much more exciting and everlasting than the drama during production that took place offscreen.”

Here’s a cute fact: The production team combined the wrap party with Linny’s birthday party to create one huge festive extravaganza. Sweet, no?

“Thank you for all the birthday wishes! Also — that’s a wrap on Liz & Dick — thank you to all my fans, crew members, friends & Lifetime!” Lohan tweeted yesterday.

This is so exciting! We can’t wait to see the film (it comes out on November 3 on Lifetime) and see what Lin-Lins will do next. Maybe she’ll finally start biking to work; cars are not her thang.