Heidi Klum is taking life one day at a time after her split and proving you don’t need a ring or a husband to be happy. Find out what the supermodel says about the prospect of getting married again and why she likes to focus on her career. 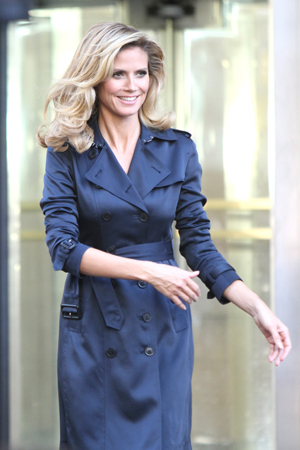 Don’t put a ring on it for Heidi Klum.

The Project Runway co-creater and former Victoria’s Secret model says she has no aspirations to walk down the aisle again — at least not right at this moment, anyway. In an interview with Bild am Sonntag via People, the supermodel says donning another wedding dress in the near future is not on her top list of things to do.

“I don’t know if I’ll get married again,” says Heidi. “Although I really enjoyed being married. I’m a dreamer. I loved our annual fairy tale weddings that were our big family parties. But sadly, it somehow didn’t work out.”

It’s sad to hear Heidi might never tie the knot again because of her unfortunate split from musician Seal — their marriage ended in January after seven years — but it’s good to see how confident she has become after sharing the news almost six months ago. Especially considering that, for a while, the beauty and mom of four stayed out of the limelight to avoid rumours and the media storm surrounding her marriage. In her April interview with ELLE, she said didn’t want to talk to the press about the split because she didn’t “think it’s necessary to have the lows printed in magazines and talked about.”

But it wasn’t long before the supermodel put her pretty face back out there and began doing the things she enjoyed most, such as playing judge on her hit fashion design reality show and hosting and judging Germany’s Next Topmodel. Heidi says that what keeps her happy is just living her life, not searching for another husband.

“I look into the future, concentrate on my family, and I have to say that I’m happy. There are worse things in life than a separation.”