The first photos of Noami Watts as Princess Diana have been released from the set of the biopic Caught in Flight, and they’ve got us really excited. Portraying a famous figure on film is no easy feat, but when it’s done well, there’s nothing better to watch. 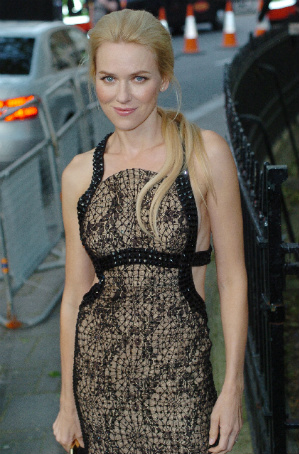 Naomi Watts can officially be added to the list of brave and talented celebrities who have undertaken the challenge of playing a well-known public figure. Currently filming Caught in Flight, a biopic that follows the late Princess Diana in her final months, including her secret romance with heart surgeon Hasnat Khan, Naomi Watts was recently photographed onset in her full getup, and the just-released images of her as Princess Di are eerily accurate. It’s pretty remarkable what a haircut and some makeup can do.

There has been a serious abundance of biopics gracing our screens big and small in the last little while. From political tycoons to Hollywood stars, practically no famous figure is off limits as a potential subject for a film. And that’s just fine for actors; starring in a biopic is an instant career booster, a clear indication that they are capable of tackling challenging subject matter and mature enough to take on the responsibility of immortalizing someone so familiar. It is most often a one-way ticket to complete respect from the general public as well as the entire entertainment industry, and an abundance of award recognition.

We love us a good biopic. There is nothing like watching our favourite actors so convincingly transform into famous game changers, making us remember why we fell in love with the stars they’re playing in the first place or filling us with unexpected empathy for the figures we despise. We can already pretty confidently say that, even based on looks alone, the talented Naomi will do the memory of Princess Diana justice. But will she make our competitive list of top recent biopic performances?

And she’s got the Oscar to prove it. Meryl really can do no wrong; she is a chameleon of the highest degree, capable of disappearing entirely in the roles she plays. As Margaret Thatcher, the only female prime minister in Britain’s history, Meryl gives an unparalleled performance in The Iron Lady. As far as historical figures to portray, Maggie Thatcher is no picnic: Her politics were largely criticized, and she was hated by a huge portion of Britain, on top of which, she was a woman running a country, which plenty of people were not thrilled about. Despite all the opposition she received, Margaret remained strong and proud (hence the nickname “Iron Lady”) and more than held her own in a world dominated by men. Leave it to Meryl to undertake such a complex role — and to do it so effortlessly. Even the characters in Billy Elliot might feel their hearts soften if they were to watch Meryl’s portrayal of their mortal enemy.

Who’d have guessed that such a slip of a girl could so convincingly play the most famous sex symbol of our time? Actually, it’s precisely the fact that Michelle Williams isn’t necessarily regarded as a sex symbol that makes her portrayal of Marilyn Monroe in My Week with Marilyn so remarkable. In the movie, Michelle infuses her Marilyn with the sensuality and mystery we all associate with the famous bombshell, and nails her voice and mannerisms in a way that would make Smash‘s Ivy and Karen melt in envy. But what really clinches this performance as one of the most impressive biopic portrayals is how beautifully she handles Marilyn in her more private moments. Even when Marilyn is not performing, Michelle manages to sustain the inexplicable magnetism Marilyn possessed, something that simply cannot be taught. In My Week with Marilyn, Michelle Williams disappears completely; all that’s left is Marilyn Monroe.

As if there weren’t already enough reason to love Colin Firth, he whips out this heartbreaking (and Oscar-winning) performance as the speech-impaired King George VI in The King’s Speech. Colin beautifully plays the self-conscious unexpected king, who finds his royal confidence thanks to a helpful actor-cum-speech therapist. It is a rather quiet performance from Colin, but what it lacks in action or volume, it sure makes up for in emotional depth. By the time he is delivering the titular speech at the end of the movie, Colin’s got the entire audience in tears, cheering him on for just being able to utter his words. Colin’s performance in The King’s Speech in an unforgettable one; we defy anyone to watch that movie and not want to track him down immediately to give him a giant hug.

Sorry. She’s just so good. As Julia Child, America’s First Lady of Food, Meryl Streep turns in yet another incredible performance in Julie & Julia. Watching her eat and then cook her way through Paris, eventually creating Mastering the Art of French Cooking — the French cuisine cookbook that made her a household name — is equal parts entertaining and adorable. And in true Meryl fashion, she also manages to break our hearts a little. It’s impossible to walk away from Julie & Julia without having fallen in love with both Meryl Streep and Julia Child. And France.