Mel Gibson’s stepmother has filed for a restraining order against the ever-abusive actor. What a letdown it is when stars we used to love prove to be such utter jerks. 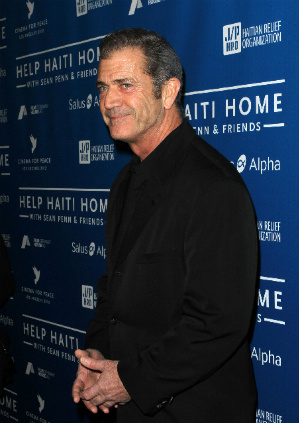 Ordinarily celebrities are the ones to file for restraining orders from those whom they feel might pose a threat to their safety. In Mel Gibson‘s case, however, the tables are turned: The most offensive man in Hollywood recently had a restraining order filed against him by his 78-year-old stepmother, Teddy Joye Hicks Gibson. According to Teddy, Mel threatened her, spit in her face and played a role in destroying her marriage to Mel’s father, Hutton Gibson (the two are currently in the midst of a messy divorce). Come on, Mel. We knew you were a violent bigot, but do you really have to go after little old ladies?

No matter how many times Mel Gibson makes headlines for his abominable behaviour, it always shocks us a little bit. After all, this is the man who claimed the hearts of practically every woman alive after his heroic and daydreamy portrayal of William Wallace in Braveheart. How can the man who made the world swoon with his “I love you. Always have” possibly be capable of such hate? It’s actually rather frightening to think that a man who has proven himself as something of a monster can so skillfully make us believe he could love that purely.

It’s always distressing when we find out our favourite celebrities are actually not very good people. Mel Gibson is arguably the president of the Abusive and Bigoted Celebrity Club, which sadly has far more members than we would hope. Here’s a look at some other celebs who have betrayed our love for them through restraining-order-worthy behaviour:

Chris Brown had a really good thing going for a while there. With so many hit songs and critical respect, Chris enjoyed significant career success and was adored by fans the world over. But that fateful night in February of 2009 brought to light a very different Chris Brown. During a particularly heated argument with then girlfriend Rihanna, Chris turned violent, leaving Rihanna with visible facial injuries that landed her in the hospital. Chris quickly experienced a drop in popularity and was the subject of intense and outspoken hatred from the public and his colleagues. Recently his career has been on an upswing, with his release of a new album and even earning the trust of Rihanna once again (much to the frustration of many people, including abuse victims). For many people, though, Chris Brown will always be seen as a violent, dangerous man who should be stripped of any opportunity to be a role model of any kind.

As Heidi Klum says on Project Runway: In the fashion world, “You’re in or you’re out.” After his now infamous Hitler rant last year, John Galliano, the former king of the house of Dior, is most definitely out. Galliano shocked the world when he was caught on camera at a Paris cafe, belligerently drunk and slinging some hateful, anti-Semitic remarks at a couple seated next to him. Included in his rant was the phrase “I love Hitler,” which obviously didn’t go over very well. He was immediately suspended from his position at Dior but was ultimately fired after Natalie Portman, who was then signed to endorse Miss Dior Cherie perfume and who also happens to be Jewish, issued a statement that she would “not be associated with Mr. Galliano in any way.” There are rumblings that John Galliano is planning to make an extravagant comeback in the near future, but with YouTube’s preservation of John Galliano’s bigoted rant, he might find it a little tricky trying to erase it from our memories.

One moment, you’re starring on one of TV’s most popular shows; the next, you’re ousted by Hollywood after making a homophobic slur. Isaiah Washington was both a fan favourite and critical darling as Dr. Preston Burke on Grey’s Anatomy. However, his popularity and success ended abruptly in 2007 when it was revealed that he had insulted cast mate T.R. Knight with a homophobic slur (T.R. Knight soon after came out publicly as gay). Isaiah apologized publicly for what he said, but he just wasn’t very good at handling the aftermath. At the Golden Globes in January of 2007, Isaiah very unsuccessfully made light of the situation, making inappropriate comments both on the red carpet and backstage. Eventually Isaiah was fired from the show, and based on how much he works now — i.e., not at all — we’re pretty sure Hollywood isn’t going to fully accept his apology any time soon.