Talk about a major craving. Nicki Minaj is placing a new emphasis on musician demands after she ordered a lot of food from one of her favourite restaurants while on her music tour. 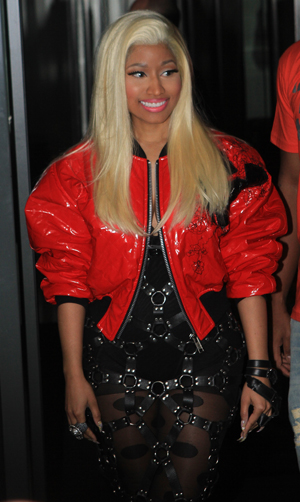 No boring salads for Nicki Minaj. No sir!

The “Starships” musician reportedly went on a chicken binge at Nando’s while performing in London last week. According to the Daily Star via the Daily Mail, the rapper, who is famous for donning pink, well… pink everything, visited the popular restaurant, and a source claims that Nicki bought 550 chicken legs, 300 chicken wings and 60 bottles of coke.

Wow! That’s a lot of food. But when you’re a famous musician, you get whatever you want, and Nicki wanted Nando’s. We doubt all that chicken was actually for Nicki to eat by herself, but she probably did indulge in the extravagant order a bit. And obviously the 3,000-GBP-bill didn’t bother Nicki too much, since the source claims the order was enough to fill “a whole car.”

A whole car? Really? Well, props to Nicki for showing women they can eat delicious foods and still maintain an active lifestyle and have the body they desire — like Nicki’s curvy hourglass figure. In its April issue, the “Pink Friday” artist told Allure that unlike with a sweaty, demanding exercise regime, she monitors her weight by keeping her eating habits simple.

“I’m naturally petite, but I definitely struggle with keeping those extra pounds off. And I hate working out,” said Nicki to Allure. “I can’t stand being on a treadmill. That mentally irks me. When I need to lose a few, I just cut out sugar and starch.”

Just by avoiding sugar and starch, she keeps that envious figure? She’s one of the lucky girls, I guess.