Katie Holmes is definitely proving that sitting around and moping after a breakup won’t solve anything. The actress is moving on with her life, and her first stop is the fashion industry, as she plans to guest star on the fashion reality show Project Runway: All Stars. 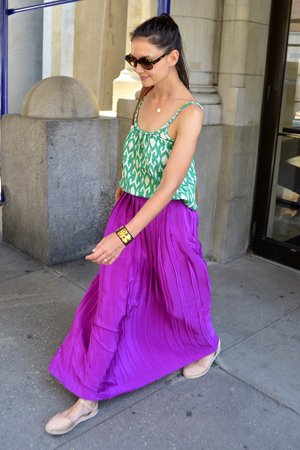 You can always count on fashion to cheer a girl up, and that’s exactly what Katie Holmes is doing.

After her earth-shattering announcement that she and Rock of Ages star Tom Cruise are getting a divorce after five years of what seemed to be marital bliss, the Dawson’s Creek star is moving on with her career. Her first stop? The runway.

Yes, she showed us her triple threat ability when she appeared and performed a song and dance number for So You Think You Can Dance’s 100th episode, and now, according to The Hollywood Reporter, Katie has her sights set on the catwalk, as she will be a guest judge for Project Runway: All Stars.

She didn’t waste much time getting back on track, did she? But good for Katie for going out and doing something she enjoys — so much so that the 33-year-old actress spent six hours filming an episode in New York just a few days after announcing her divorce.

If fashion is what makes Katie feel good, then she should go all out. Katie is no stranger to the fashion industry; in 2009 she was the face for coveted fashion line Miu Miu as well as the main model for American clothing line Anne Taylor’s spring 2011 collection.

She will be in good company on the show, as co-creater and executive producer Heidi Klum unfortunately went through a similar situation with estranged hubby, musician Seal, when they announced their separation and divorce in January 2012. Heidi spoke up about the distress the divorce was causing her to ELLE for its April issue, where the busy supermodel and mom told the magazine she handles all stress and drama by just accepting life for what it is.

“It’s emotions inside of your body that are a tornado,” said Heidi about the separation. “And then the outside world doing all this craziness — with you wanting it or not wanting it — is another tornado. But as hard as it is, so is life.”

Maybe these words will help Katie cope, or maybe Katie and Heidi will just talk fashion. Whatever makes them both happy and keeps them moving on with their lives!

Tom Cruise has big “goals” for Beckham
Are Tom Cruise and Katie Holmes dunzo?
The least likely reasons for Tom and Katie’s divorce