Many people have been speculating about what the reason is for Tom Cruise and Katie Holmes’ divorce. We have absolutely no idea what caused their breakup, which means we can let our imaginations run wild with some of the more outlandish explanations being tossed around. 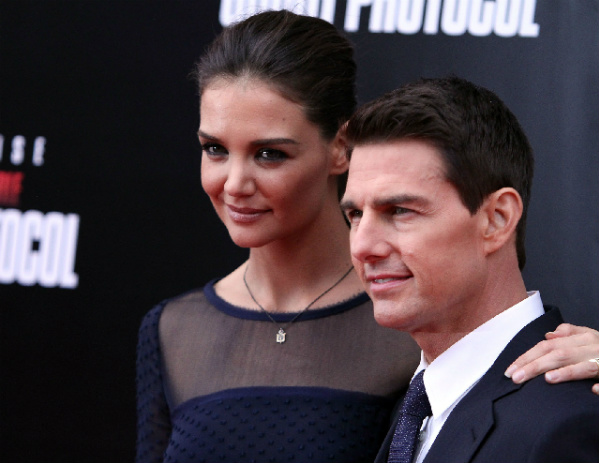 The fairy tale has finally come to an end. This past Friday, Katie Holmes shocked us all — most of all, her soon-to-be ex-husband Tom Cruise, who apparently didn’t see it coming — when it was announced that she filed for divorce from the Rock of Ages star after five years of marriage. The news has shaken the entertainment world to its very core. Despite the occasional reason to suspect their relationship might be on the rocks, Tom and Katie seemed to have a great thing going. Many people believed this marriage was the real deal, one of the rare celebrity relationship success stories amidst an ocean of failed Hollywood marriages. Alas, that was not the case. Like it or not, TomKat is no more.

Speculation over what caused the end of the marriage started as soon as the announcement of their breakup went public. Many people are saying Tom’s devout commitment to the Church of Scientology was what pushed Katie over the marital edge. Others suspect Tom’s mega-celebrity status and endless work schedule, leaving Katie alone with Suri much of the time, led to a rift in their relationship. And then, of course, there are those nasty, relentless rumours that Tom is gay.

Time will tell what caused the end of one of Hollywood’s highest-profile marriages. In the meantime, we thought we’d weigh in with what we think might have led to Tom and Katie’s divorce. And by weigh in, we mean let our imaginations run wild with impossible, outlandish explanations that are without question not what caused the divorce.

The “married” quota in Hollywood was over its limit

It’s rather coincidental — too coincidental, perhaps — that around the same time the announcement of Tom and Katie’s divorce was made, word got out that Alec Baldwin had just married his fiancee, Hilaria Thomas. Could the two events be linked? We think so! Everyone knows we can’t have too many celebrities married all at the same time, lest the world should implode. To allow room for other celebrity couples to wed, a married couple had to file for divorce. Unfortunately the Department for the Regulation of Celebrity Marriages decided to go with TomKat for this round. Because Tom and Katie comprised such a high-profile celebrity marriage, their divorce opens the door for several others in its stead, such as Alec and Hilaria’s, as well as the upcoming (and now green-lit) marriages of Miley Cyrus and Liam Hemsworth, Justin Timberlake and Jessica Biel, and Brad Pitt and Angelina Jolie.

As one of the most photographed children in the media, Suri has likely grown very comfortable with inordinate amounts of attention. At age 6, Suri’s beyond-her-years fashion sense has gotten her a whole lot of press. It also doesn’t hurt that she’s the offspring of two of the planet’s biggest stars. But maybe that just hasn’t been enough. News of this divorce has many people talking about what’s going to become of poor little Suri: How will her parents’ split affect her in her formative years? How is she coping with the news now? Has this divorce changed her forever? It’s the kind of attention you can’t get from just walking around New York with your mom, looking cute. Now, with all this talk about Suri’s future, her ubiquity will be even greater than before. We can’t help but wonder as we look at her sweet face and pretty dresses whether the attention-hungry Suri was behind all of this. She may be a brunette, but we have our suspicions that Suri is part of the long-lost, mind-controlling tribe of Children of the Corn.

Katie was tired of pulling her neck

Tom may be one of the biggest leading men in Hollywood, but he’s also one of the shortest. Despite his considerably diminutive stature, though, Tom seems to have a penchant for tall ladies: Before Katie Holmes, who towers above him, Tom was married to the equally statuesque Nicole Kidman. And while his personality may make up for his lack of height, eventually it might not be enough to heal chronic neck pain. We think Katie must have had enough of constantly having to look down at Tom, especially at red carpet events, where her already impressive height was increased with her heels. We won’t be surprised if Katie next dates a basketball star, whose height will force her to constantly look up, as a way to undo the previous damage.

They wanted to protect John Travolta

We can only assume there is a strong sense of camaraderie between fellow Scientologists Tom Cruise and John Travolta. John has been taking a serious beating in the press lately after being accused of sexually harassing a number of masseurs. We don’t know much about Scientology, but we like to think its members look out for one another. And so, in what we believe must be true Scientology fashion, Tom devised a plan with Katie — that she would file for divorce from him as a way to distract us all from the drama that is John Travolta’s life. And it sure seems to be working — no one’s talked about John Travolta for days!