That was quick. After a short engagement, Alec Baldwin and fiancee Hilaria Thomas got married in an extravagant ceremony in New York City. 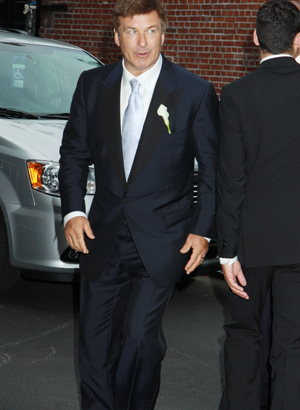 Isn’t this nice? Remember those days when a marriage proposal meant you actually wanted to get married and not be engaged for two years (in some cases enough time to change your mind)…

Alec Baldwin is clearly an old-school kind of fella, having proposed to then girlfriend Hilaria Thomas back in April and the couple tying the knot this Saturday.

The actor took a short break from paparazzi-beating to commandeer the perimeter of St. Patrick’s Old Cathedral in New York and impregnate it with a dozen security officers four hours prior to the ceremony.

The basilica was decorated with white lilies and hydrangeas. The 28-year-old bride wore a silk Amsale gown with cap sleeves and a keyhole back neckline with crystal buttons, while the groom wore a Tom Ford suit.

The wedding took place in front of close friends and family as well as a handful of celebrities, like Woody Allen, Tina Fey and Robert Kennedy Jr. Ain’t no thang, keeping it low key.

The reception was held at New York University’s Kimmel Center.

Sounds like a simple wedding… Rent out a block of the city for the ceremony, have the streets littered with a quarter of New York’s inhabitants and a small horde of photogs, and hold the reception at the Kimmel Center. Was the golden, diamond-studded dome in the sky held up by Atlas himself not available?