He’s a speedy one. Johnny Depp and Amber Heard are allegedly a couple, only two weeks after the actor announced his split from Vanessa Paradis. 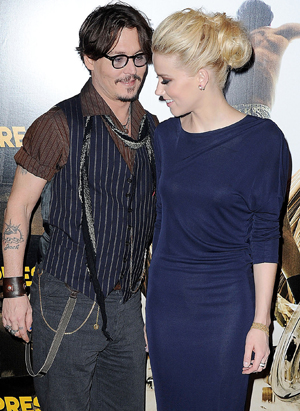 While the world’s population was both heartbroken and excited to find out Mr. Johnny Depp was single again, we all knew that inevitably he’d be snatched away by a gorgeous creature of a woman. But not this soon!

We’re not ready yet…

According to reports, those pesky rumours about Depp and Rum Diary co-star Amber Heard secretly canoodling are true. Us Weekly confirms the two are, in fact, a couple.

“They are 100 per cent dating,” a source told the magazine. “He treats her really well.”

Depp met Heard on the set of The Rum Diary back in 2009, but reportedly did not pursue a relationship until 2011, when he and Paradis became distanced.

“They started sleeping together during the press tour,” Heard’s friend told Us.

Aw, how romantic. Who’s not a sucker for a good cheat-on-the-mother-of-your-children story?

Fun fact: Amber Heard is only 11 years older than Depp’s daughter Lily. That’s sure to put some tension into those family dinners.

Depp split from Vanessa Paradis a few weeks ago after 14 years together. They have two children: 13-year-old Lily-Rose and 9-year-old Jack.

There ye have it. Are you liking the new couple, or missing Vanessa? Sharesies.