It looks like Usher is the latest celebrity to be faced with a ruthless and determined stalker. The R & B musician had to get a temporary restraining order against a woman who claims she is not only in love with him, but she’s also his wife. 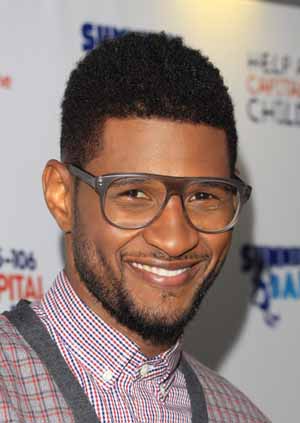 As if Usher did not already have enough on his plate with the custody battle with his ex-wife, the R & B musician is now facing trouble over his “fake wife.”

Yes, 26-year-old Darshelle Jones-Rakestraw has been stalking the Looking 4 Myself artist, so much so that she even showed up at his house and told cops she was married to Mr. Raymond — a.k.a. Usher Raymond — which didn’t please the singer and prompted him to obtain a temporary restraining order for “the safety of his immediate family,” according to TMZ.

Darshelle showed up at Usher’s house on June 23,  pounding the door and demanding to be let in. Of course, the cops were called and told her to leave the vicinity. But being persistent — like most celebrity stalkers are — she showed up at the singer’s house again, and this time when the cops arrived, she told them she was Usher’s wife.

Probably not the smartest alibi to come up with if cops told you the day before to stay away.

Though the 33-year-old musician managed to get the restraining order, the alleged stalker claims she is the victim in this whole thing and says in a video via E! Online that she and Usher have been in communication since 2011.

“I am not a stalker,” she says in the video. “I have been an advocate for Mr. Raymond and his family. He has been complaining constantly to me about his ankle pain, his headaches and his situation with obtaining custody of his children,” she says. “Me and Mr. Raymond had binding agreements, to where he was supposed to make living arrangements for me.”

In addition to these alleged communications between the two, Darshelle also claims in the video that Usher said he was going to help her in her music career and that she plans to file charges against him for slandering her name.

Even though Usher says he has no idea who this woman is, her story, for the most part, is somewhat convincing. But in all fairness to Usher, she should just leave the guy alone. If she really wants help with her music career, she should just post herself singing and performing on YouTube. Hey, it worked for Justin Bieber.