The rampant rumours of Katie Holmes and Tom Cruise splitting up have been permeating the great wide net. Are they true? 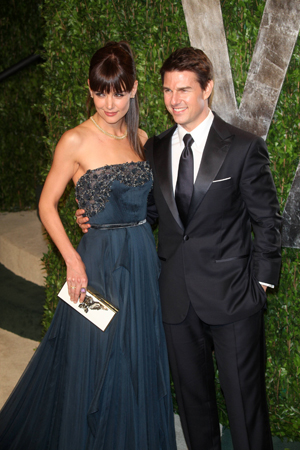 We’re not strong enough for this. First, Johnny Depp and Vanessa Paradis hop onto the Split Express, now this? Say it ain’t so…

It’s best to just let it out: Katie Holmes and Tom Cruise are getting a divorce.

Oh dear Zeus, it looks more tragic in writing than in our heads! But it’s true. Katie Holmes herself announced the marriage is done.

“This is a personal and private matter for Katie and her family,” Holmes spoke through attorney Jonathan Wolfe to People magazine. “Katie’s primary concern remains, as it always has been, her daughter’s best interest.”

The two married in 2006 after Cruise proposed to the actress at the top of the Eiffel Tower. The couple has only one child, little 6-year-old daughter Suri.

This will be Cruise’s third divorce (and a first for Holmes). He was previously married to Nicole Kidman and Mimi Rogers. He will probably not be jumping on Oprah’s couch over this…

Very sad news, but we wish the couple all the best. And Tom, call us.

Too soon for jokes?

More on the couple