Channing may be a strong man, but there is some pain he can’t stand — like getting his legs waxed! The Magic Mike star was completely honest about one of the most gruelling things he had to endure for his new movie role and which has turned him off from ever experiencing it again. 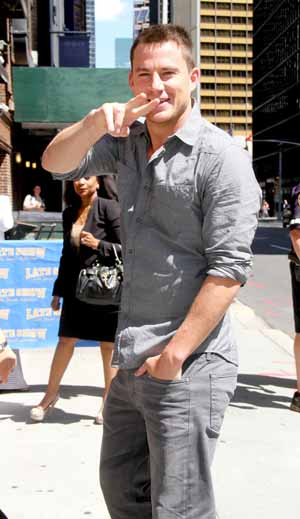 Sure, Channing Tatum may be buff, handsome and talented, but even this manly-man has some fears.

The Magic Mike star may have played his stripper role to perfection in his new flick, but there was one part of his role he didn’t enjoy at all: waxing his legs.

“It was the most painful thing I’ll ever do,” says Channing to People. “And it’s something I’ll never do again.”

Yup, what has become second nature for women when it comes to our beauty regime has completely turned off one of the most masculine actors around. Yes, Channing, now you know what women go through just to look fabulous.

But even though the 32-year-old actor admitted to cringing in pain over being waxed, what really captures our interest about the ex-stripper is the strict diet he was put on — one that resembles the diet a lot of celebrities are on nowadays. Channing told the entertainment magazine that along with working out every day for “three hours a day,” he was also on a dairy- and gluten-free diet.

If you recall, gluten-free has become a popular way of eating, particularly for Kim Kardashian and, more notably, Miley Cyrus, who praised the diet in early April via Twitter for helping her slim down in conjunction with her exercise regime.

“Everyone should try no gluten for a week! The change in your skin, physical and mental health is amazing. You won’t go back!” tweeted Miley in response to the backlash she received about allegedly being anorexic. Even Kim said last month that her enviable body was a result of eating gluten-free.

Well, it looks like Channing is in good company in terms of his eating habits. Maybe he should work on how to handle the pain of waxing, though, just in case he stars in another film that requires him to experience hot wax again.