Lourdes Leon is at it again! The 15-year-old daughter of Madonna recently posted a twitpic of herself provocatively posing in one of her mom’s famous cone-shaped bras. Should her act of teenage rebellion be regarded as nothing more than that, or does her presence in the public eye mean she should be better behaved? 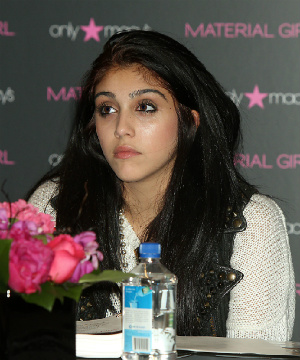 Some young ladies raid their mothers’ closets and parade around in their best gowns and heels. When your mom is Madonna, though, the closet is a bit more colourful, as we now know from the photo Madge’s daughter, Lourdes, recently tweeted, featuring her striking a sexy pose while wearing one of her mom’s famous cone-cupped bras. The provocative image, which was quickly taken off Twitter, has caused a bit of a tizzy in the media, since Lourdes is only 15 years old.

Over the past little while, Lourdes has been establishing herself as something of a rebel. Earlier this year, it became known that Lourdes had taken up smoking, something Madonna was not at all thrilled about. But Madonna’s disappointment doesn’t seem to have swayed Lourdes much, who it seems is keeping up her controversial image by stepping into the, um, bra of her famous rule-breaker of a mother.

Lourdes’ twitpic comes on the heels of an eyebrow-raising image released by another celebrity offspring: Willow Smith. In the photo of her and her friend, Willow’s mouth is wide open as she shows off a white tongue stud. It wouldn’t be such a big deal if Willow weren’t only 11 years old. The image has since been followed up by a statement from the daughter of Will Smith and Jada Pinkett-Smith that the tongue piercing is not real. But the girl clearly has a rather premature taste for rebellious oral hardware.

The rebellious acts of Lourdes and Willow give us pause. To be clear, we don’t frown about the identity development of any young woman; in fact, we think a certain amount of rebellion is a healthy, even necessary thing. But when an act of rebellion from an underage girl crosses the line into uncomfortably provocative, as Lourdes’ and Willow’s did, we start to get a little concerned. The reality is that most girls who behave as Willow and Lourdes have are not nearly as publicly exposed as the daughters of celebrities, and so when they act rebelliously, they don’t stand as much of a chance of setting a questionable example as Willow or Lourdes. Because they are so often in the public eye, do the children of celebrities have a responsibility to behave?

It’s a tough one to call. Kids like Lourdes and Willow are famous not necessarily because of the inspiration they bring to other people their age, but because of who their parents are. It’s one thing to expect someone like the squeaky clean Selena Gomez, who is independently famous thanks to her success on the Disney Channel, to keep her misbehaviour under wraps so as not to give her impressionable fans the wrong message. But when the only reason people are paying attention to you is because you’re the daughter of one of the biggest pop stars who ever lived, it seems like you should be entitled to a little more of a lax attitude when it comes to your public image.

On the other hand, the reality of being the child of a celebrity is that you will be in the public eye for your entire life. To many people, that inherently comes with the reponsibility to set an example and behave in a way that inspires others your age to do good. Of course, it is up to the kids’ celebrity parents to, as best they can, steer their kids in a direction that encourages responsible behaviour. However, there is only so much that can be done before their children start making their own decisions, responsible or not.

In the next 10 to 15 years, we’re going to be witnessing the maturation and development of a lot of celebrities’ kids, thanks to the current Hollywood baby boom. It will be interesting to see what kinds of people these famous kids turn out to be. Maybe trying on your mom’s cone bra is just something that goes along with growing up famous.

PETA disses the Olsen twins
Can John Travolta’s blatant PDA with wife Kelly save him?
Miley Cyrus busts a move in club