He’s not just a Katy Perry accessory; Russell Brand is a comedian by trade. The actor is starring in his very own late night show, premiering today. 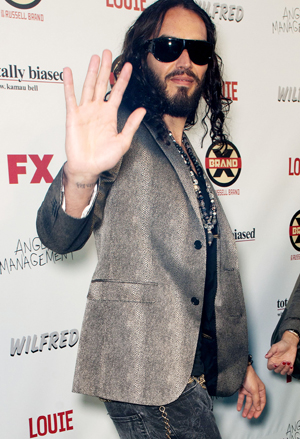 Aside from a very blunt handful of narcissism, this could actually be funny.

Russell Brand‘s first U.S. television show, Brand X with Russell Brand, will be airing in Canada this evening, and you might want to give it a quick glance.

Brand is now very famously known as Katy Perry‘s ex-husband and has been putting his humour to the test in several mediocre films like Arthur and Get Him to the Greek. But with Brand X, we will see the comedian getting back to a coarser and more organic form of funny.

The premise is simple: It’s Brand onstage (with an audience) poking fun at whatever tickles his fancy.

“I love doing stand-up because you have a direct interaction with the audience. There is no mediation, no script, no direction. It is my great love. What is it other than telling the truth to human beings that are identical to me?” the actor told Reuters.

The first episode will air tonight at 11 p.m. on FX Canada.

It will be great to see Brand return to the comedy that made him famous in the first place. Nothing like a crude, sarcastic British man doing stand-up in a tiny L.A. club for a skeptical audience, right? It will definitely put a new spin on the daily news.

Will you be tuning in or passing it over?