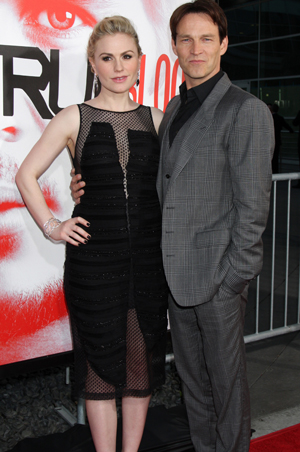 OK, what’s better than one baby?

Twins, of course! It’s just about the math, people.

True Blood beautiful people Anna Paquin and Stephen Moyer are not only expecting their first offspring together, but they’re expecting twinsies!

And here’s a fun fact: True Blood co-star Sam Trammell also has twins and even gave the couple some parenting advice.

“I’m so excited for them. We sent them a special gift. It’s so interesting that True Blood has become, like, the ‘twins’ show,” the actor told Us Weekly.

“It’s harder having twins, but it’s all we know. So we’re trying to impart some decent wisdom. I told them to hold on tight.”

If we all had friends who imparted only valuable parenting advice (“don’t let your kid drink toilet water” does not count), the world would be a much better place, no?

Luckily for Paquin, her hubby already has two children from previous relationships and knows how it’s done. Otherwise, diapers would be everywhere…

Thoughts? Worries? Long-lost dreams? And let us begin our baby name drafting, shall we?