John Travolta and Kelly Preston engaged in a blatant PDA at the premiere of Savages. Will the couple’s public display of affection help us forget the messy lawsuits and sexual assault charges John is currently facing? 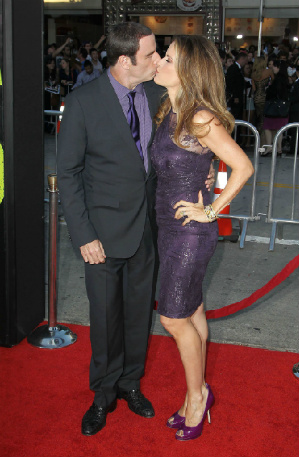 John Travolta wants you to know he is really, really into his wife, Kelly Preston. The couple rather insistently showed the world how in love they are at the premiere of John’s new film Savages, during which John and Kelly, attached to each other and smiling blissfully, shuffled down the red carpet and kissed for the cameras. And in case there was any mistaking how well John and Kelly go together, they also wore perfectly colour-coordinated outfits.

It’s no secret why John Travolta felt the need to so publicly demonstrate his affection for Kelly; by now we’re all well versed in the many lawsuits John Travolta was recently slapped with after being accused of sexually harassing three masseurs on separate occasions. John has flatly denied any involvement in these allegations, but his reputation has taken a beating regardless. Rumours swirl daily about the possibility of John being gay — or the kind of person who would sexually assault others.

In a case like this, actions speak louder than words. It is simply not enough for John to claim innocence on all charges. He needs to show the world he is both straight and loyal to his wife. And so he has turned to the simplest, most efficient defence of all: the PDA.

When you’re a celebrity, there are two kinds of PDA (public displays of affection). The first occurs when two stars who are deeply in love disregard — or just plain forget about — the ever-watching public eye and share a moment of private affection in a populated area. The second is the exact opposite and occurs when a celebrity couple wishes to draw the public’s attention and make sure everyone knows how in love they are. This ostentatious second variety of PDA is most common when a celebrity is trying to inform the public of his or her new relationship without having to address it directly in a statement, or when a celebrity needs to work on his or her reputation.

And most of the time, it works. Kim Kardashian is perhaps the queen of the relationship-establishing PDA, whose relationship with Kris Humphries was verified and then constantly reaffirmed through her very public displays of extreme affection. She even had us — and Kris — believing she was truly in love, and despite how insincere Kim seems to be when it comes to relationships, it’s hard not to buy into the depth of her feelings for her current boyfriend and frequent PDA partner, Kanye West. As well, Tom Cruise and Katie Holmes beat us over the head with the love they had for each other when they started dating all those years ago, to the point of us just surrendering in exhausted acceptance of their romance.

It’s no wonder, then, that John Travolta and Kelly Preston would engage in such a blatant PDA in front of such a wide audience. Convincing us of his love for his wife is one of the only aces John has up his sleeve at the moment if he wants the public back in his corner. We expect to see a few more of these romantic John/Kelly shots in the near future. And then maybe those lawsuits will vanish into thin air.