We’re not sure what’s going on in Hollywood lately, but it seems like the celebrities and photographers just aren’t getting along. Socialite and heiress Paris Hilton is the latest celebrity to get into a brawl with the picture-snapping enthusiasts, which makes Justin Bieber’s confrontation look like child’s play. 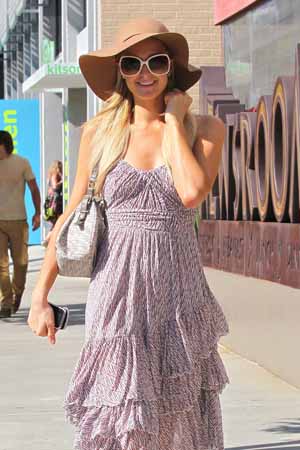 Paris Hilton loves attention — just not that much!

The heiress is the latest celebrity to get into a scuffle with the paparazzi, after she confronted a photographer in West Hollywood. According to RadarOnline.com, paparazzo Billy Barrera claims the model-singer-actress-now-DJ attacked him for no reason whatsoever. Billy, who had just finished covering Katy Perry‘s after-party for her movie premiere, said Paris wasn’t her usual smiling self and just sprung on him.

“I wasn’t expecting to get jumped! I’ve shot Paris a lot and am always nice to her,” says Billy to RadarOnline.com.

Sounds like a scene from the Discovery channel, when you think of it: Paparazzo stalks celebrity, and celebrity attacks back. But in this case, it was the blonde socialite who was acting like a lion, which Billy believes was caused by Paris’ taking drugs or having something she didn’t want the cameras to catch.

“Paris was acting like she was on drugs. I know drugs. I’ve seen a lot of people on them, and Paris is one of them,” says Billy. “She attacked me for no reason… I never hit her back. I just held on to my camera and waited for it to end.”

Whoa, maybe it’s not a good idea to say things that may not be true, Billy. Maybe Paris was just being camera shy and didn’t want anyone to see her under-eye bags, and she didn’t mean to attack you.

However, it looks like Paris may potentially have some legal matter now added to her list of things to do, since Billy is planning to file a police report, claiming Paris caused him physical pain and injuries to his arm, wrist, neck and head.

Here’s an idea: Paparazzi, don’t get celebrities mad to the point of total destruction, and celebrities, don’t go crazy on the paparazzi. I mean, can’t you guys just get along?

Fun facts about Paris – Hilton, that is!
Top 10: Most over-publicized celebrities of 2010!
Remembering the golden ages of celebrity catfights