After Anderson Cooper and Oscar the Grouch’s adorable performance on the Daytime Emmys, we got to thinking: Why aren’t there Daytime Emmy Award categories for Sesame Street’s countless celebrity guest stars? 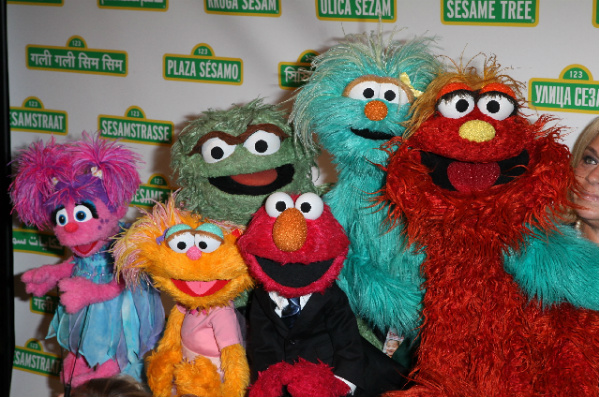 It’s true that the Daytime Emmy Awards will never live up to the Primetime Emmy Awards in stature or popularity. Which we get, of course: Daytime TV, with its multitude of talk shows, game shows and soaps, comes with far more censorship and generally a little less excitement than its prime time counterpart’s sex, guns and filthy(ish) language. However, the Daytime Emmys have one thing the Primetime Emmys don’t: Sesame Street.

One of the highlights of the June 23 event was an uplifting duet between Anderson Cooper and Oscar the Grouch, who claimed to be in attendance because “Elmo was busy.” The song featured Oscar grumpily inquiring what was so great about daytime, anyway (his least favourite time of day) and Anderson happily explaining daytime’s perks — all TV-related, naturally. The adorable skit was an instant crowd-pleaser, but it wasn’t because of the ever-charismatic and outgoing (not) Oscar; it was because of the chemistry between Anderson Cooper — one of the most recognized and revered journalists on television — and a grouchy puppet from a children’s television show.

One of the things that has sustained Sesame Street‘s popularity all these years not just among children, but their parents as well, is the show’s inclusion of the world’s most recognizable celebrities and personalities. Even the most stoic of political figures are transformed into beaming softies the moment Grover invites them to count with him or when Elmo insists on a hug. In fact, some of these celebrities’ appearances are so enchanting that we think they should be celebrated at the Daytime Emmy Awards, with special prizes designated for appearances on Sesame Street. Based on how well Anderson and Oscar’s duet went over and given how many celebrities appear on Sesame Street on a regular basis, we’re confident the people over at the Emmys would consider the following categories in next year’s show:

Sesame Street, always on top of who’s who in the Top 40, has under its belt a roster of musical guests that rivals Saturday Night Live‘s. From REM to Katy Perry, Sesame Street has featured some of the music industry’s most popular performers. It makes perfect sense, then, that there be a category reserved for the best musical performance on Sesame Street. Taken into consideration would be originality of the performance, the musician’s relationship with the puppets involved and how much fun is being had by all. For example, if this award existed in 2008, there is no question that Feist, who sang a Sesame Street-appropriate version of her hit song “1234,” would win.

Many celebrities who are invited to appear on Sesame Street participate in sketches that require counting, spelling or teaching the viewers a valuable lesson. One memorable episode featured James Gandolfini, then at the height of his Sopranos fame and playing one of TV’s most feared characters, sharing with Zoe monster his fear of talking vegetables and haircuts. It is arguably some of the actor’s finest work and certainly worthy of an award. Of course, with the many other celebrities who show up and help various other monsters count to 10 or spell “hat,” James would have some serious competition.

Some celebrities are lucky enough to have recurring roles on Sesame Street. Will Arnett, for example, can occasionally be seen as Max the Magician (an adorable nod to his Gob character on Arrested Development), whose lack of magical consistency is certainly made up for by his enthusiasm. As well, Kristin Chenoweth has a recurring gig as Ms. Noodle, who appears on the Elmo’s World segments. Both Will and Kristin, along with many other frequent Sesame Street guest stars, turn in consistently entertaining performances that deserve to be recognized based on cuteness alone. And think of the acceptance speeches!