She sure leads an exciting life. Miley Cyrus hit the dance floors with close girlfriends in Hollywood. Did she dance to her own music? 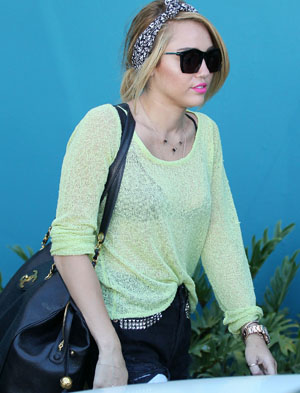 While boring old Liam Hemsworth is keeping busy on the set of his new film in New Orleans, his fiancee, Miley Cyrus, is hitting the party scene with close girlfriends.

The actress, avec friends, was spotted at Beacher’s Madhouse in the Hollywood Roosevelt Hotel, having bucketsful of rhythmical fun.

“Miley spent most of the night dancing,” an insider told People magazine. “She was very chatty and was in a great mood. At around 12:15 a.m., she pulled her girlfriend into the photo booth to take pictures together.”

As a side note, that’s one very observant insider. We don’t know how it works south of the border, but up here, underage individuals are not permitted in clubs or bars… How’d Cyrus get in? Just out of curiosity…

All we have to do now is wait for Miley to get back to work… Or to retire.