This is exactly why Jennifer was cast as the lead in The Hunger Games. The Hollywood actress proved she is smart both on and off the set, after she rushed to the aid of a woman who collapsed near her house. 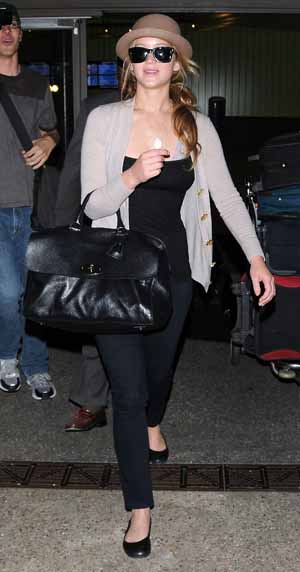 Just call her Jennifer Lawrence, super heroine — both on and off the set.

The Hunger Games star is joining the ranks of other unofficially dubbed celebrity superheroes, after coming to the rescue of a woman who collapsed right in front of the Hollywood starlet’s Santa Monica complex. According to the Daily Mail, Jennifer was walking her dog with her mother when she and another bystander came to the aid of the fainting woman. They all comforted her until the police and paramedics showed up.

OK, something definitely must be in the water in Los Angeles.

Yet the 21-year-old’s quick thinking doesn’t surprise us, since we know she is skilled in handling difficult tasks, as seen from her worthy onscreen performance in the sci-fi flick.

So not only is Jennifer Hollywood’s “it” girl, but she shares good company with other celebrities who have helped someone in need. In May, Ted star Mila Kunis calmly helped her house worker, who was suffering a seizure, and stayed with him until paramedics arrived, and Canadian-born actor Ryan Gosling prevented a journalist from getting side-swiped by a taxi in New York.

I’m telling you, these celebrity heroes and heroines need their own club — or at least their own reality television show.