Emily Maynard is one lovably complex lady — and boy, are the guys feeling that tonight! In an effort to secure hometown dates next week, the final six guys vie to show Emily they are each exactly what she is looking for. And their efforts provide us with the following list of five ways to win the girl. 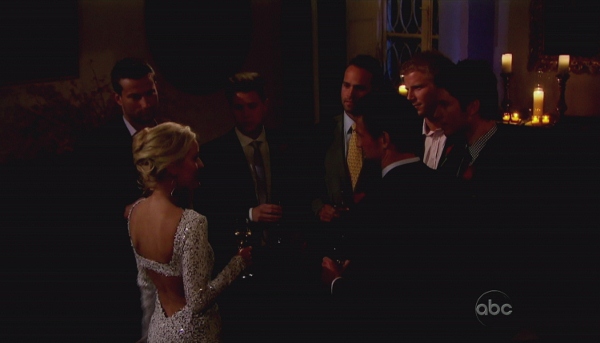 Well, all the rumours that have been circulating about Arie’s past are finally answered tonight! Emily seems livid when she is told that Arie once had a relationship with Bachelorette producer Cassie Lambert that he never told her about. Disappointingly, the explanatory conversation among the three of them takes place off-camera, so there’s no way of knowing what was truly said. But from the bits and pieces discussed on their one-on-one date, Arie seems to have explained he didn’t think it was worth mentioning, and Emily decides it isn’t an issue after all. Thank goodness! They are too cute a pair to wind up at odds with each other.

Arie finally says “I love you,” and Emily’s expression speaks volumes. She may not be able to say she loves him back, but she does say, “you just made me the happiest girl,” and that’s a darn good sign.

Despite saving Doug at the last rose ceremony to get to know him better, Emily sends him home to his son halfway through the group date. He proves himself to be a true gentleman but too much of a good guy to put the moves on her quickly enough.

Now, Arie has seemed like the front-runner for the majority of the season, but Jef is quickly beginning to climb in the ranks. He and Emily may have had a slow start, but he proves himself to be undeniably adorable tonight when he buys a marionette for Ricki. He and Emily then go on to recreate the history of their relationship with their own marionettes. If the fact that he’s young and quirky excludes him from being the next Bachelor, there needs to be some sort of spinoff created, because he is one funny guy.

Despite many self-made claims throughout the season that he is very mature for his age, Chris is coming apart at the seams tonight. He even goes so far as to say, “If I don’t get a hometown date, I’ll be scared for anyone around me.” Yikes! After pulling Emily aside in the middle of the rose ceremony, he does in fact score the final rose. But if he’s this panicky with six guys remaining, how on earth will he get by as the numbers continue to dwindle? There’s only one way to find out, and that’s by tuning in to see the hometown dates next week!