It looks like the Liz & Dick movie may have hit a roadblock. The Lifetime movie, which is currently being filmed, is under investigation after the main star and actress, Lindsay Lohan, along with some crew members, have complained about long work days. 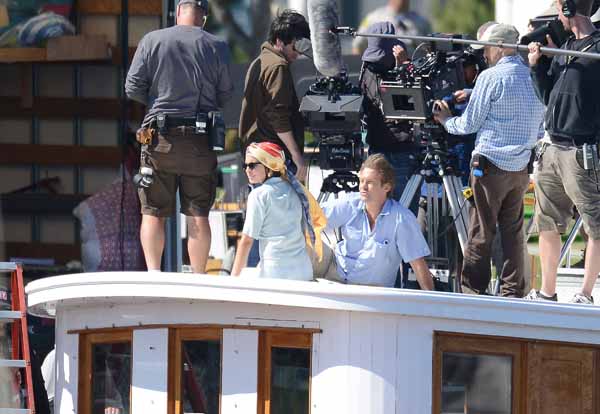 Is Lindsay Lohan overworking herself to the point of exhaustion for her new movie role?

It looks that way, and the Hollywood labour union is not pleased — at all.

According to The Hollywood Reporter, actors’ union Screen Actors Guild – American Federation of Television and Radio Artists (SAG-AFTRA) and the movie and television crew members’ union, International Alliance of Theatrical Stage Employees (IATSE) are investigating the Lifetime biopic Liz & Dick after Lindsay Lohan and two crew members have been subjected to long hours and being overworked.

If you didn’t already hear, LiLo was hospitalized late last week, suffering exhaustion and dehydration, reportedly from working too much on the new set of her film, which is said to have caused her car accident, where she slammed into a dump truck and was injured by the incident.

“Lindsay worked a gruelling schedule the past few days,” says Lindsay’s publicist, Steve Honig, according to The Hollywood Reporter. “She was on-set last night at 7 p.m. and worked through the night until 8 a.m. this morning.”

Wow… Lindsay is definitely taking this new role seriously. But she shouldn’t work herself to exhaustion and compromise her health. The crew members, who worked in the hair department, were also said to have experienced “severe dehydration and exhaustion.” Well, no matter how seriously the 26-year-old actress is taking her new role or how hard the cast and crew are working, SAG-AFTRA doesn’t want any of the actors or actresses overworked, and the union is prepared to take action.

“Our contracts protect members on the job, and if these kinds of situations are occurring and our members advise us about it, we will contact production and make certain that the contract is being adhered to in all aspects…” says the union.

Hopefully this gets cleared up, because from the looks of it, this movie is very important for Lindsay and her career, and it would be a shame if production was halted because of union issues. Plus, we’re ready to see Lindsay back in the game. Aren’t you?